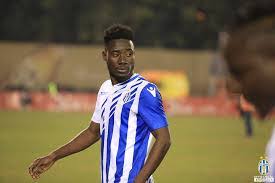 KF Tirana star Winful Cobbinah got himself on the score sheet during his team's 3-1 away victory over Bylis 1992 FC on Wednesday afternoon.

The 28 year old needed only 27 minutes to announce his presence in the game, showing his incredible eye for goal to break the deadlock.

The half look set for just a one goal lead until Idriz Batha made it two just before the half time whistle. Ardit Peposhi gave the hosts a glimmer of hope with his strike coming six minutes after the hour mark. The home team pushed for an equalizer but saw their hearts torn apart with 18 minutes left to go. Gentian Muca scored the final goal of the game.

Tirana now have 56 points after 27 matches, nine more than second placed Kukesi. Cobbinah has netted six times for his club in the league this season.