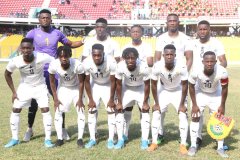 The Ghana u-23 team, the Black Meteors have secured qualification to the 2019 edition of the CAF u-23 Cup of Nations thanks to a strike from first leg villain Yaw Yeboah against Algeria in the second leg of the final qualifying round.

The West African side went into the fixture trailing on the away goal rule and in need of a win at all cost to ensure they seal qualification.

The first leg ended 1-1 at the Accra Sports Stadium five days ago with the captain for the Meteors Yaw Yeboah missing a penalty kick in the first half when the team was down by a goal.

Playing as guests to the young Foxes of Algeria on Tuesday evening, Yaw Yeboah netted the only goal of the day at the Stade du 8 mai 1945 in Sétif to hand his side a 1-0 second-leg victory.

That second-half strike after an edgy encounter proved vital at the end of the tie, handing Ghana her rights to play at the u-23 cup of nations slated to be staged in Egypt in November.

Though coach Ibrahim Tanko and his men will battle to clinch that trophy, they will also use the opportunity to fight for qualification to the 2020 Tokyo Olympic Games.