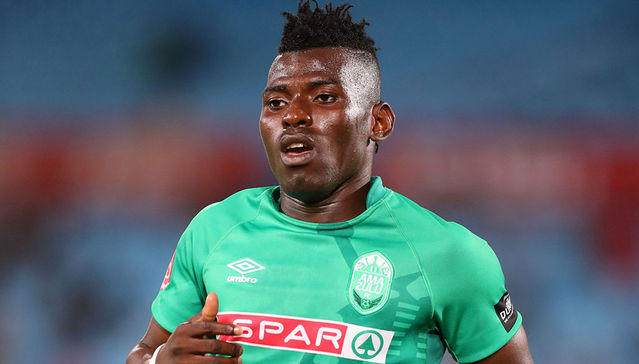 Amazulu FC midfielder Samuel Mensah Darpoh believes a call-up to Ghana’s national under 23 team will be a huge stride in his career.

The 21-year-old, who has spent the last three seasons with South African Premier League Side Amazulu FC, has been knocking on the doors of Ghana’s national teams ever since he made his debut in the topflight back in 2017.

Despite the change of environment, blended with a totally different system, Darpoh,  who plays as a defensive midfielder for one of the biggest clubs in South Africa, Amazulu, discloses that the pressure doesn’t get to him.

“I am feeling more South African now because it has been more than three years here and I feel so much at home here. I don’t feel the pressure at all.”He told Platinum Sports.

When further asked about any approach to naturalize for South Africa, the energetic midfielder revealed that there has been several attempts to convince him to switch nationality but he still thinks Ghana is the only country he would love to play for.

“Most of my teammates are mostly surprised I am yet to play for a national team and they jokingly ask me to play for South Africa.My coaches have also asked me a couple of times why I am not with the national team but I believe it is all about time”

The former Okwahu United player qualifies to play for Ghana’s Black Meteors who will be at next month’s Africa U-23 Cup of Nations in Egypt.Even though he was overlooked in the qualifiers,he still believes a call up will be a great honour to him.

“I will welcome a call up to the Black Meteors.I will be more than glad to represent my country at any level I fall under”

The elegant and hard working midfielder has emerged on the radar of some European clubs following a fantastic season  in the South African Premier League for the Kwazulu Natal side.