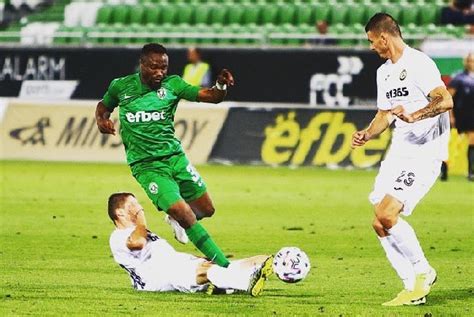 German Schalke 04 intends to recall Bernard Tekpetei if the club drops out of the Bundesliga. Bernard Tekpetei is currently playing in Ludogorets on loan. The news was announced by the authoritative edition Sport1.de.

According to the media in Gelsenkirchen, the club is already planning their future in the second Bundesliga, and if they are relegated from the elite, all players who are currently on loan at other clubs will be returned to the team.

"Tekpetei has yet to score in 14 league games, even in the last 6-0 win over Eter. The 23-year-old Ghanaian was in the starting lineup, but by the time Claudio Kesheru scored four times, Tekpetei had to leave the field after 56 minutes of play, however, it cannot be ruled out that the winger will return to Gelsenkirchen in the summer and play an important role in Schalke 04," wrote Sport1.de.

After the arrival of Valdas Dambrauskas, Tekpetei became a solid starter in Ludogorets. He was among the best during the winter training in Turkey. In the match with Sportist for the Cup of Bulgaria he scored two goals.