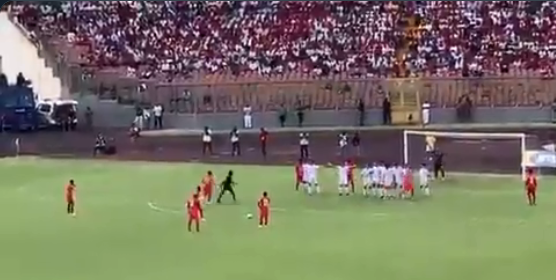 Kumasi Asante Kotoko has today posted an emphatic 2-0 win over Etoile du Sahel at the Baba Yara Sports Stadium in the first leg of the expected two-legged tie in the final round to the group stage of this year’s CAF Champions League.

The two top clubs of African football after progressing from the first round are now bent on crossing the hurdle of the second round to ensure they make it to the enviable money zone.

The teams went head to head this afternoon at the home grounds of the Porcupine Warriors who continue to dominate whenever they play in front of their supporters.

Following a very good start to the match, Kotoko went ahead on the 3rd minute courtesy a sumptuous free-kick goal from summer signing Augustine Okrah. The attacker curled his effort from the edge of the opponent’s penalty box around the human wall and into the back of the net.

Both sides tried to change the scoreline in the remaining minutes of the first 45 but had to go into the break with the 1-0 scoreline in favour of the hosts.

Etoile had their woes in the West Africa country worsened when they conceded another goal just 10 minutes into the second half. This time around it was Richard Arthur who showed composure after beating an offside trap before finally firing his shot into the net.

The away side pushed to get a vital away goal but all their efforts failed to bear any fruit with the home side's defense standing firm on all occasions.

Ahead of the second which will be played on September 27, Kotoko holds an advantage and will go away with confidence to the turf of Etoile du Sahel.