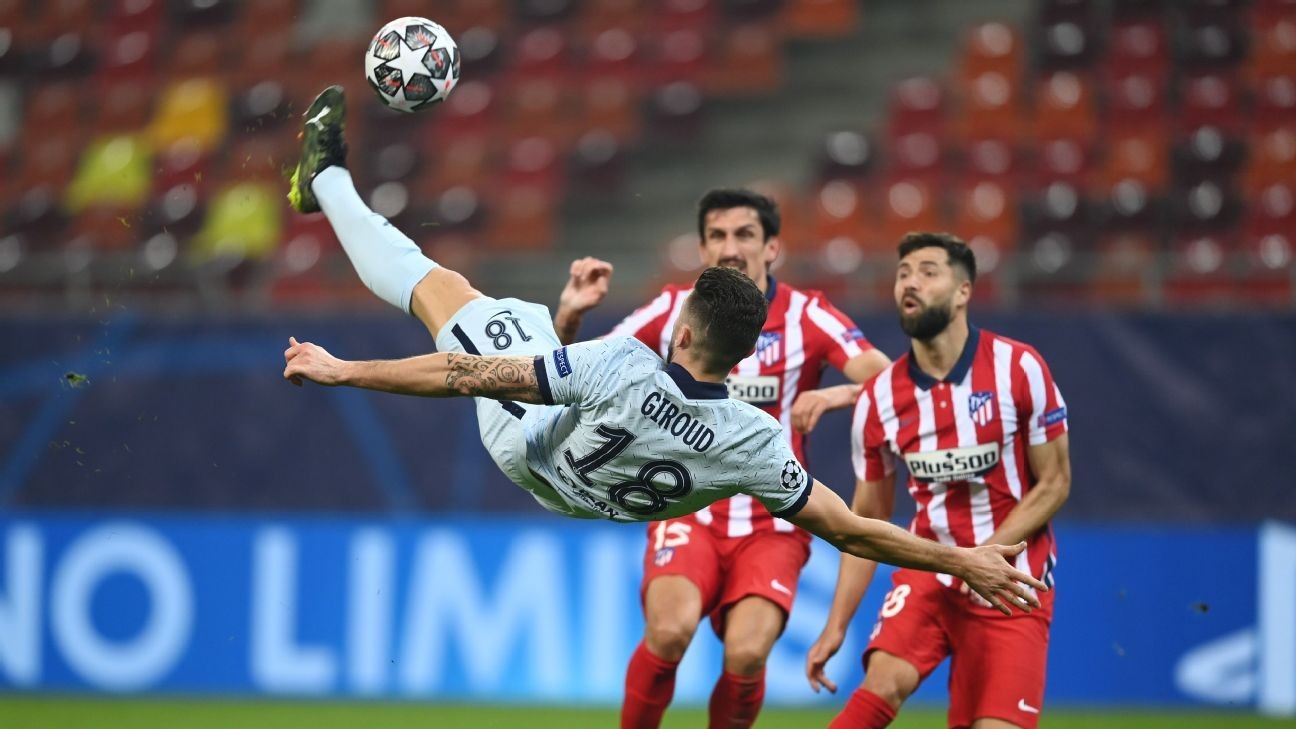 An outrageous overhead goal from Olivier Giroud handed Chelsea a 1-0 victory over Atletico Madrid in their Champions League round of 16 first leg in Bucharest on Tuesday night.

The result gives Thomas Tuchel's side the advantage of an away goal going into the second leg on March 17 as they seek a spot in the UCL quarterfinals.

Chelsea had a good chance to open the scoring against the La Liga leaders just before 15 minutes, but Mason Mount's whipped in cross skipped past the goalmouth just out of the reach of Timo Werner.

Atleti hit Chelsea on the counter just before half-time with Angel Correa finding space behind the defence, but Luis Suarez couldn't deal with the short cross that came his way and the teams went to the break scoreless.

Diego Simeone's side have led La Liga for most of the season but have experienced a dip in form in February and went into Tuesday's match smarting from a shock 2-0 defeat at home to Levante after drawing two of their previous three games.

Giroud finally broke the deadlock before 70 minutes with a spectacular overhead strike that was initially ruled out for offsides, but after a video review was given when the ball was adjudged to have come off an Atletico player before it was hit into the back of the net.

"I didn't know what to think about the goal, I just focussed on hitting the overhead kick and was pleased to see it go in the back of the net, I had no clue about being offside," Giroud said.

"We know the importance of the away goal in European Cups so I was pleased to help the team win the game."

Both Mount and Jorginho were shown yellow cards in the match and will be unavailable for Chelsea in the return leg due to card accumulation.

The match had been relocated to Bucharest after travel restrictions between the UK and Spain due to the coronavirus ruled out playing in Madrid.

Deprived of the usual raucous atmosphere they would normally expect for a European knockout game at the Wanda Metropolitano and forced to take a four-hour flight to the game, there was little sense of them having a home advantage.

Ultimately, Atleti played with little ambition or intensity and could not manage a single shot on target to bother Chelsea keeper Edouard Mendy.

After the match, though, Atleti keeper Jan Oblak said his team would shake off the defeat and be ready for the second leg.

"In the dressing room I saw a team with its head held high and I'm convinced we're going to improve," he said. "I don't think this is a crisis for us, it's just a little different.

"In a difficult situation you see how strong a team really is and I'm sure we're going to come out of this period and keep moving forward."