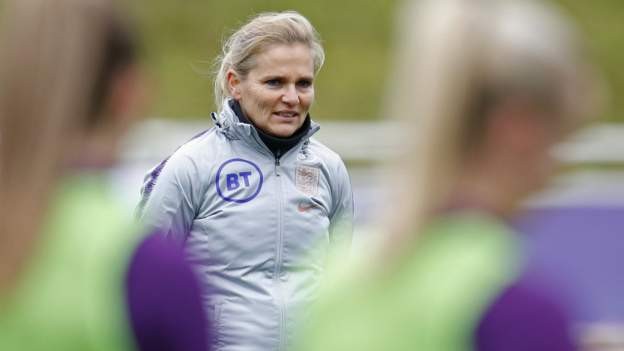 Sarina Wiegman says she expects Saturday's Women's World Cup qualifier against Austria to be the toughest of her reign as England manager so far.

The Lionesses have scored 32 goals and conceded none to sit top of Group D after four matches.

Austria are second in the table as the only other unbeaten team in the group.

"I expect a tougher game than any other game we have played so far," said Wiegman, who took charge of the Lionesses in September.

She added: "They have a pretty experienced team. They have been growing, they have a very clear style of play and are well organised.

"They have good players, a lot of them play in Germany so we expect a good competitive match, although I do think - and hope - that we will have more possession than them."

Austria, ranked just 13 places behind England at 21, needed an injury-time goal to salvage a draw against Northern Ireland in their last group game on 26 October. Just three days earlier the Lionesses cruised to a 4-0 win against the same side.

The World Cup qualifier at Sunderland's Stadium of Light comes seven months before the two sides meet in the opening game of the Women's European Championships at Old Trafford.

"It is a test for us both," Wiegman said. "We are only focusing on the game tomorrow, getting a good performance and winning, then after that we will see.

"This is comparable because you are playing the same team. The big difference is that the Euros start, it is the opening game in a sold-out stadium and that will be a very exciting moment."

Wiegman also said her side will have to adapt to the strong winds and rain expected in the north east on Saturday, with the Met Office issuing a red warning as the region is set to be battered by gusts of up to 100mph when Storm Arwen hits.

"Of course we have our style of play but you always have to adapt to the circumstances," she said.

The match will be a homecoming for a number of England players, with Beth Mead, Jill Scott, Demi Stokes and Jordan Nobbs all starting their careers with Sunderland.

The region has been a rich source of talent with other Lionesses - Lucy Bronze, Steph Houghton and Lucy Staniforth - all having links to the area.

Dutch manager Wiegman, who admits she is still getting to know the geography and history of the English game, says the homecoming feeling of the game has "everyone excited".

"I've experienced support at all the games we have played in England," Wiegman said. "I expect that here too. What I've heard is that it might be even more loud."

Defender Millie Bright, who is captaining England against Austria and Latvia on Tuesday, says she "understands" the significance of the game to her team-mates as their next group game will be played in Doncaster where she began her own career.

"They are super excited," she said. "Some were raised and born here and played for Sunderland. It is a special moment."