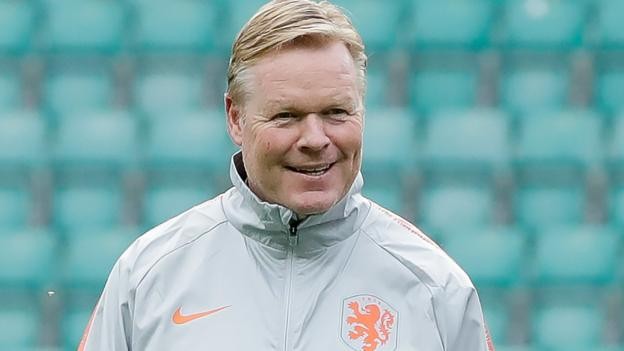 Koeman was appointed manager of the Netherlands in February 2018BBC coverage

How to follow: Live commentary on BBC Radio Ulster, text commentary on the BBC Sport website and extended highlights on BBC One NI at 23:15 BST

Netherlands manager Ronald Koeman has warned his players that they must be ready for "direct confrontations" against Northern Ireland.

The Dutch side host Michael O'Neill's men in a vital Euro 2020 qualifier in Rotterdam on Thursday evening.

Northern Ireland are currently second in Group C, three points ahead of the Netherlands who have played a game less.

"They are fighting machines," Koeman said of the Northern Ireland players.

"Perhaps they haven't got the structure or quality technically but it's very direct, direct confrontations.

"They are a team that can make the games difficult for any opponent and we have to see how we can find the solutions.

"If they can get at you they will and they will get you by the throat. You've got to be prepared for that."

Northern Ireland 'have to raise the level' against Netherlands

The former Everton and Southampton boss was impressed with Northern Ireland in their 2-0 defeat by Germany in Belfast last month.

However, he added that he believes there is a big difference in how O'Neill's team set up at home and when they are away.

"It can be that home and away there is a difference in their game," he said.

"I think they had the idea to perhaps try and finish Germany off and for an hour they were able to live with them and had the better opportunities.

"But from the moment they went 1-0 down you can see the spaces increase and the Germans took advantage."

The Netherlands are still hurting from not qualifying for Euro 2016 and Koeman has said he is fully aware of how important Thursday's match - and the return fixture in Belfast in November - could be to their 2020 qualification hopes.

"We play both games against Northern Ireland for our ticket," he added. "It starts on Thursday and if we don't get the result we want, it will be very painful.

"There is always pressure for Holland. We think that we've always got to play everywhere and we've got the quality for that. I think that this team is very hungry.

"Not many players have played in the big tournaments and everyone wants to be there but there is always the development of a team.

"These two games against Northern Ireland are really important. There is pressure but the players are used to that, they play for big clubs and they've got to win so it's no different to that."