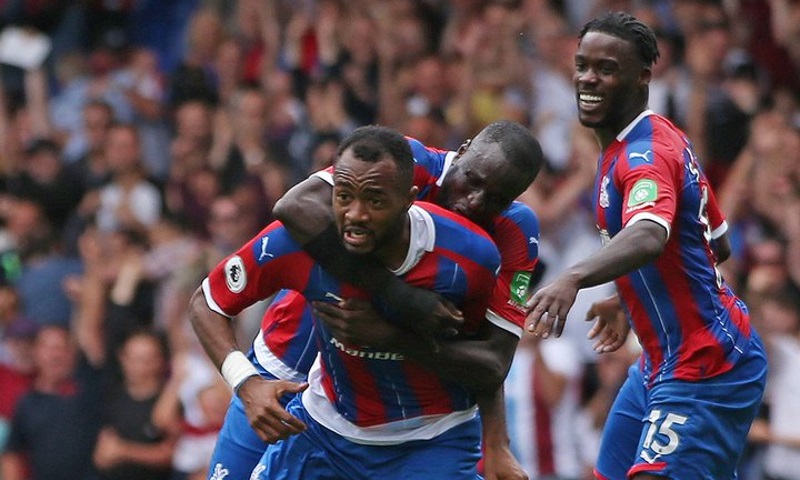 Crystal Palace have a history of playing with a traditional target man up top.

After the aforementioned names moved on, Christian Benteke was the next in line for the throne, signing from Liverpool in a club-record deal worth £27m to lead the line for the Eagles.

The Belgium international thrived in his first season at Selhurst Park under both Alan Pardew and then Sam Allardyce, justifying the decision to pay a premium for his services. 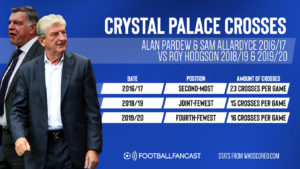 Benteke scored an impressive 15 Premier League goals in his first season in SE25, spearheading a system that suits his strengths – his heading ability and physical power in the air was utilised to the maximum.

Under Pardew and then Allardyce, the south Londoners put in 23 crosses per game, the second-most in the Premier League that season – you can see why Benteke notched as many goals as he did, with seven of his strikes coming via his head.

However, as has been well documented, the former Aston Villa striker has tailed off massively since Roy Hodgson stepped into the hot seat following Allardyce’s resignation and Frank de Boer’s short-lived tenure.

Since the former England manager took charge, Benteke has managed to score just four league goals in the last two seasons prior to the current campaign, and the proof is in the pudding as to why.

It’s the crossing stats again. The 28-year-old thrives in the air and always appears to be most effective when the ball is whipped onto his head – two of his four goals since Hodgson’s arrival have been headers, whilst the other two have been penalties.

Under the 72-year-old manager, Palace put just 15 crosses in per game in the 2018/19 season – the joint-fewest out of any team in England’s top-flight. It’s no surprise that Benteke only managed to notch one header that term, with that being his only goal in all competitions.

So far this season, Hodgson’s much-changed style in comparison to Allardyce’s is continuing as it did in 2018/19 – with few crosses coming in and little success for Benteke.

The Eagles have completed just 16 crosses per game, the fourth-fewest in the Premier League, and things have gotten even worse for Benteke as he has recently been dropped for Jordan Ayew.

In telling fashion, it is the form of the Ghanaian – signed from Swansea this summer for £2.5m – which has served to prove that the target man days at Selhurst Park are over, with Benteke being the main casualty of this changed approach.

Ayew has netted two goals this season whilst playing as a centre-forward in Hodgson’s possession-based game, already netting half of Benteke’s total tally across the last two campaigns in just two games against Manchester United and Aston Villa.

Not to be reactionary, as Ayew could well not score another goal this term seeing as he is far from prolific, but it is becoming apparent that there is no use anymore for a tall, aerially-reliant striker in this Hodgson team.

Despite the Eagles’ history of playing with a traditional target man up top and utilising their best abilities, Ayew’s recent form coupled with Benteke’s woes for the last two years strongly suggest that this era is over at Selhurst Park.