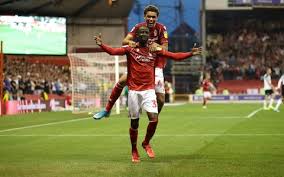 He may be just over a week late for Halloween, but Albert Adomah will look to haunt Derby County again on Saturday, when the Rams travel to face the Ghanaian's Nottingham Forest in the latest edition of the East Midlands derby.

Adomah helped the Reds pile on the pain in the previous meeting of the two teams, a League Cup clash in late August, which was won 3-0 by Forest. Adomah opened the scoring, before further goals from Joe Lolley and Joao Carvalho secured an emphatic triumph.

The mutual enmity runs deep between Forest and Derby, with their rivalry stretching back almost 130 years [they first met in October 1892]. The above-mentioned clash was the 105th between the teams in all competitions and saw the Reds continue their recent dominance of two straight wins, four games unbeaten.

The rivalry has been 'dressed up' in the past decade or so with the introduction of the Brian Clough Trophy, in honour of the legendary manager who enjoyed great success at both clubs, but at heart it remains a gritty, aggravating showdown between two teams and sets of supporters who simply don't like each other very much.

And the desperation on each side is ramped up even more when one appears closer to success than the other. Last season it was Derby who were riding high with manager Frank Lampard and went agonisingly close to securing promotion to the Premier League via the playoffs.

This term it's Forest, under the guidance of French-Tunisian manager Sabri Lamouchi, who are gunning for a return to the top flight. The Reds sit in fifth place, five points adrift of leaders West Bromwich Albion, but have a game in hand and look to be one of the genuine contenders for a rise to the elite division.

Derby are down in 15th place, but just four points off the pace of Forest. Manager Phillip Cocu will be urging his charges to win this Saturday's clash and use it as a springboard for a rise up the standings.

Amidst all this hostility sits the smiling Adomah, with the 31-year-old looking to continue his reputation as something of a 'lucky charm' for promotion: he helped Middlesbrough secure a return to the Premier League in their 2015/16 campaign, and then did the same with Aston Villa last season, before joining Forest in July.

"It's a great feeling when you get promoted. I've been to Wembley and lost playoff finals. It's one of the worst days in your life as a player," Adomah told the Nottingham Post, emphasising his belief that this Forest team is capable of a rise back to the top table for the first time since the late 1990s.

"Winning promotion is a different level. Words can't express the joy, the feeling you have conquered something. I definitely feel we can achieve that here if we keep on playing as we are."

Adomah is not a regular starter for Forest, with 10 of his 13 appearances in the Championship this season off the bench, but he is an important asset for Lamouchi when the manager needs to switch up his tactics, as he is capable of providing both attacking thrust and defensive nous on either wing.

This Saturday Adomah will hope to have a more offensive role as a substitute (assuming Ameobi and Lolley retain their starting places on the flanks) and perhaps target a second goal against Derby, which would endear him even further to the Forest faithful.

And the Ghanaian will not be the only African influence on this eagerly-anticipated clash, with Congolese goalkeeper Brice Samba set to continue between the sticks. Forest's Malian Samba Sow and Bissau-Guinean Alfa Semedo are close to returning from hamstring and back injuries respectively, but they are more likely to see action only after the international break.