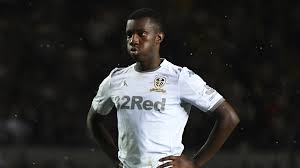 Ghana and Leeds United youngster Eddie Nketiah has expressed his readiness to fight for a place in the team, having not started any game in the English Championship this season.

Nketiah, who joined the Whites in the summer on loan from Arsenal, is yet to start a game for the Championship side despite scoring the same number of league goals as Patrick Bamford.

"It was nice to get on," the 20-year-old told Yorkshire Evening Post while reacting to Leeds goalless draw at Sheffield Wednesday at weekend.

"The team were obviously drawing so I just tried to add a bit of life and energy to the attack and obviously do my thing and I think we managed to create a couple of chances.

"The keeper saved mine and Jack had a couple of chances.

"Overall I think it was a positive second half and obviously they are a difficult team so to come away with a draw is not a bad result."

“Obviously it's the manager's decision but all I can do is keep working hard and put forward my place to play," he continued.

"If I play ten minutes or five minutes or 15 I will always try and help the team and add something positive.

"That's what I tried to do today."