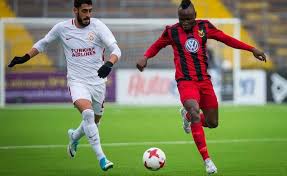 Ghanaian player Samuel Mensah is hopeful of ending this year with a win when his side Ostersunds FK face Bundesliga outfit Hertha Berlin in the last Group J game of the 2017/2018 Europa League.

Mensah has been influential for the side this season as he has played in all their games.

He has played in every position across the back four as Osterunds continue their fairy tale story in Europa League.

The Swedish side have already booked their place in the next stage of the competition as they are on top of the group with ten points but Mensah is eager for a win in Germany to end the year on a high.

“It has been a great and successful year for me and my team both in domestically and in Europe. Everything went well,” Mensah told footballmadeinghana.com

“It has been a great campaign in the Europa League though this is our first time. We have already qualified for the knockout stage but I want us to end the year with a win in Germany,”

The Jamkraft-Arena side have produced many stellar performances away from home which includes a 2-2 draw with Galatasary in Turkey, a win over Ukrainian side Zorya and a win over Luxembourg giants Fola ESC.