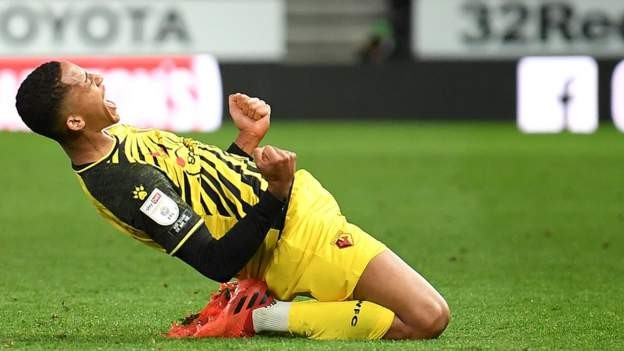 An error-strewn affair, without even a shot on target until the 74th minute, was eventually decided by a real moment of class from the 19-year-old, turning on the edge of the box before bending a brilliant right-footed effort into the top corner.

Until that point neither side had done enough to justify the three points, although Watford did look the more threatening.

The Hornets probed throughout but were often let down by the final pass, while they also had strong appeals for a penalty turned down after half-time when Nathaniel Chalobah's shot appeared to strike the arm of Derby's George Evans.

The home team's clearest sight of goal came in the immediate aftermath of the Brazilian's opener for the visitors, with Wayne Rooney side-footing wide from just inside the area.

The former England captain also lifted a stoppage-time free-kick onto the roof of the net with goalkeeper Ben Foster sprawling across his goal, but the hosts' late flurry did little to mask an otherwise insipid display.

The result leaves the Rams still searching for a first home win of the season, while they have won just one of their seven games at Pride Park since football resumed in June.

Victory for Watford, who have now won three of their five matches following relegation from the Premier League, moves them into the play-off places.

It also ended a run of 10 games without an away win dating back to their time in the top flight.

Attempt missed. Wayne Rooney (Derby County) right footed shot from outside the box is just a bit too high from a direct free kick.

Ben Wilmot (Watford) is shown the yellow card for a bad foul.

Jason Knight (Derby County) wins a free kick in the attacking half.

Attempt missed. Domingos Quina (Watford) right footed shot from the left side of the box misses to the right.

Curtis Davies (Derby County) wins a free kick in the defensive half.

Attempt missed. Wayne Rooney (Derby County) right footed shot from outside the box is close, but misses to the right. Assisted by Tom Lawrence.

Tom Cleverley (Watford) wins a free kick in the defensive half.