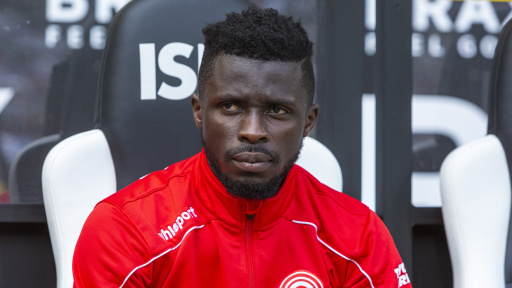 The pacey winger joined the German Bundesliga club in the summer transfer window of 2019 in a deal that saw the club paying 2.8 million euros to Waasland-Beveren.

Having joined on the back of an outstanding 3-years stay in the Belgian Jupiler Pro League where he was regarded as one of the best attackers, he has not been able to live up to expectations.

Before the season was halted because of the Coronavirus (Covid-19) disease, injury setbacks had denied him the opportunity to play consistently to find his feet.

Due to Fortuna Dusseldorf’s struggles, they are now battling relegation as they sit 16th on the standings of the division.

In line with that coach for the side, Uwe Rösler has decided not to take any chances and has decided to go with players he believes will get him the needed results in the remaining matches of the season.

Players who have not proved throughout the season including Nana Ampomah have no option than accept the bench-warming duties and hope they are called upon to help when needed.

Ahead of Dusseldorf’s fixture against Hoffenheim, the chances of the Ghanaian forward starting remains single. He is however hopeful of getting the chance to enjoy some minutes to regain his form.