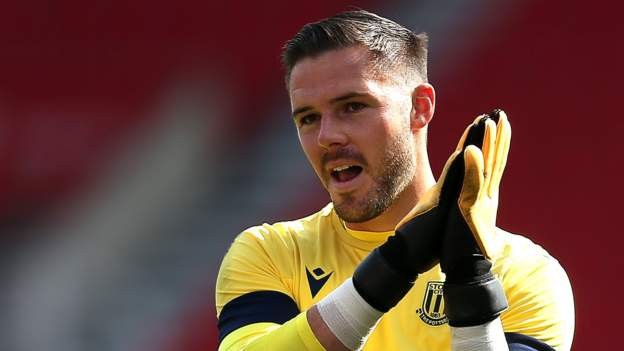 Crystal Palace have signed Stoke and England goalkeeper Jack Butland on a three-year deal for £1m.

Butland stayed with Stoke after relegation from the Premier League in 2018 and his contract was set to expire at the end of this season.

The 27-year-old was given his England debut by Palace boss Roy Hodgson in 2012 and has gone on to win nine caps.

Meanwhile, keeper Angus Gunn has joined the Potters from Southampton on a season-long loan.

Gunn cost the Saints £13.5m when he joined them from Manchester City in 2018.

However, the England Under-21 keeper lost his place after the crushing 9-0 home defeat by Leicester just under 12 months ago and has only featured in FA Cup ties since.

Butland was understudy to Jordan Pickford for England at the 2018 World Cup but lost his number one spot at Stoke to Wales goalkeeper Adam Davies this season.

He will battle with Vicente Guaita and Wayne Hennessey for a first-team place at Selhurst Park.

Hodgson said: "I am aware that his last spell at Stoke hasn't been the happiest one for him but I sincerely believe that with his qualities, coming to a new club will enable him to resurrect his career and show once again what a good goalkeeper he is."

The Trump Show: Behind the scenes of his presidency

The Young Offenders: All episodes are streaming now