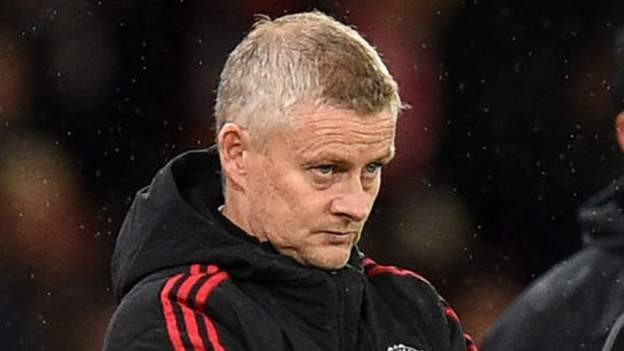 Manchester United boss Ole Gunnar Solskjaer says he has "come too far to give up" despite overseeing Sunday's 5-0 thrashing by Liverpool at Old Trafford.

Solskjaer said the loss is his "darkest day" as manager but will carry on.

"I have come too far to give up. I am not built that way," he told BBC Radio 5 live.

"The feeling we have had is we were getting where we wanted to be but in the last few weeks results haven't come and we have hit a brick wall. We have conceded too many easy goals and that is a concern.

"I am still thinking about tomorrow's work, we are all low. This is the lowest I have been but I accept the responsibility, that is mine and mine going forward."

The victory was Liverpool's biggest win at Old Trafford in their history and set a number of unwanted landmarks as far as Manchester United are concerned.

It was their biggest loss in this fixture since October 1895, when Liverpool beat them 7-1 at Anfield, and was the first time they have lost by a margin of five or more goals at Old Trafford without scoring themselves since 1955.

Many Manchester United fans left at half time with the home side 4-0 down.

Their team conceded only once more after the break but also had Paul Pogba sent off just 15 minutes after he had come on as a substitute.

The results means Manchester United are seventh in the Premier League, seven points behind Liverpool who are second.

Despite Sunday's capitulation, Solskjaer says he has no doubt he can guide Manchester United to better times ahead.

"I do believe in myself, I do believe I am getting close to what I want with the club," added Solskjaer, who took over as manager in 2018,

"The results lately haven't been good enough. Hands up, that brings doubt in anyone's mind but I have to keep strong and I do believe in what we have been doing."

Manchester United captain Harry Maguire apologised to the club's fans and said the players would have to look at themselves for the manner of the defeat.

"It hurts. The boys are devastated, it is not good enough, nowhere near good enough," he told BBC Sport.

"I am not here to analyse the game. It is not good enough. Our fans stuck with us throughout. We apologise to them, they deserve more. We have to move on and we have to improve.

"At the moment I am hurt, disappointed, I am looking at myself, every player should do. Every player has to look at themselves because to lose that game in the way we did is nowhere near good enough."

From paneer to pioneer: Greg Jenner and guests examine the man credited with Britain's first curry houseTony Bellew is Angry: Besides Gary Neville what frustrates Jamie Carragher most?