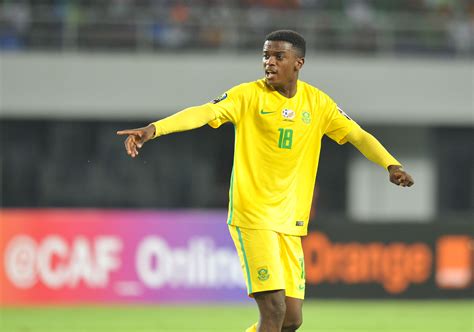 Teboho Mokoena, a Bafana Bafana midfielder, has expressed his immense satisfaction in serving his nation following a critical away win over Ethiopia in a 2022 World Cup qualifier.

Mokoena scored Bafana Bafana's opening goal in a 3-1 victory at the Bahir Dar Stadium to keep them top Group G in their bid to qualify for the Qatar 2022 World Cup.

Mokoena spoke after Saturday's important match on what it means to him to wear the Bafana Bafana shirt.

"Every time I get a call-up it's always an honour and privilege to represent my country," Mokoena said.

"I'm very honoured to be here and it's the proudest moment of my life to represent my country.

"We've been speaking of Vision 2022 since 2015 and now I'm there, and we are the group that is going to take Bafana Bafana to the World Cup.

"So it's the proudest moment of my life and I'm sure my family is very happy. I'm sure the young kids back home have been given hope that they can also make it big.

"Because when they see someone from a small hometown like Bethlehem making it in South Africa at the top level, I think it's a motivation for them, and for me.

"It motivates me more to work harder and to succeed more than I already have and I'm very hungry for more and I’m looking forward to the future."