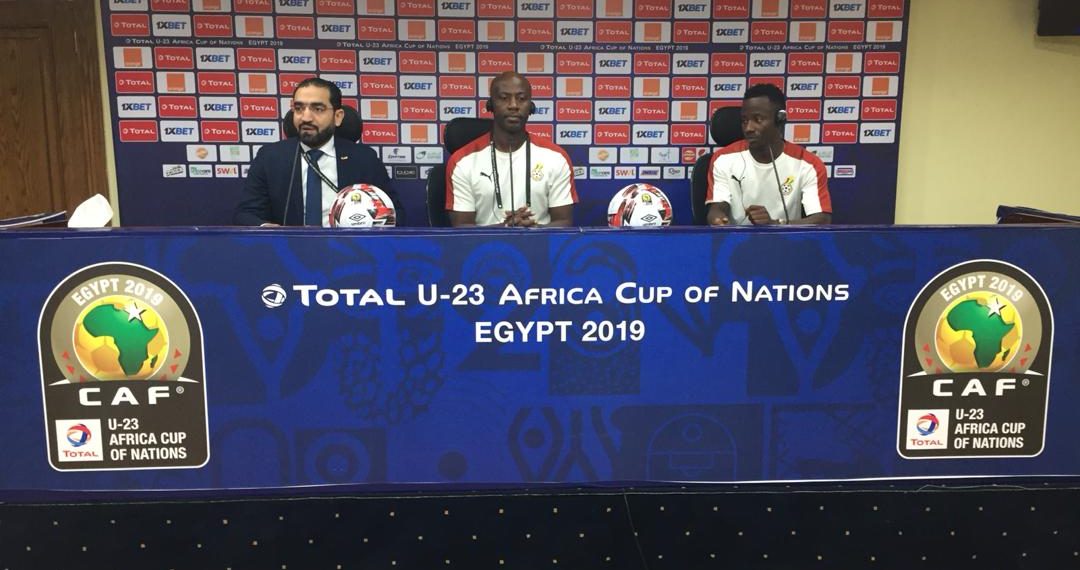 Black Meteors coach Ibrahim Tanko has hailed his team’s mental toughness and ability to improve their performance during the second half of their matches.

But for the game against Egypt which Ghana lost 2-3, the Black Meteors have fought strongly in the second half of all matches played in the group stage of the 2019 U23 AFCON in Egypt.

Ghana came down from a goal down and drew 1-1 with Cameroon with just 5 minutes to the end of the game before scoring twice against Mali to qualify to the semi-finals stage of the competition.

“As a coach, my technical team and I try to identify the weaknesses of our opponents in the first half of our matches and strategize for the second half. That is why in every second half we come out stronger and fight for a win”.

“Mentally, my team goes into every match expecting to win and are physically prepared for the upcoming matches”, the National U23 head coach stated the pre –match press conference ahead of the semi-final clash against Cote D’Ivoire on Tuesday.

Coach Tanko stated though he expects a difficult game against Cote D’Ivoire, his team is poised for victory to ensure qualification to the 2020 Olympic Games in Tokyo and also make an appearance at the grand finale on Friday.

The two West African neighbors will square off in a semi-final tie at the Cairo Stadium on Tuesday 19 November 18 with the winner set to earn a ticket to the 2020 Olympic Games.

“I’ve watched their (Ivory Coast) matches especially the last game with my technical team and we are expecting a tactical game tomorrow because the teams will not want to make mistakes.”

“They are a very strong side and we all play a similar style of football  because we are neighbors. It’s going to be a very good game and tough for both countries. We need to pay attention to details and identify their flaws so that we take advantage of it.”

“For us it is a half-final because a win will give us a chance to qualify to the Olympics and to play in the final match. We will not underrate any of the four semi-finalists but will do everything possible to achieve our target of qualifying to Olympic Games and win this competition”.

Coach Tanko also confirmed that all 23 players are fit and are in contention for selection against the Ivorian side.

“We will prepare the same way but we know it’s a semifinal so we have to approach it differently”, the former Borussia Dortmund Centre forward emphasized.

Ghana’s match against Cote D’Ivoire has been moved to the Cairo Stadium and will kick off at 4:00pm (2:00pm GMT) with Hosts Egypt taking on South Africa in the second semi-final match at 8:00pm (6:00pm GMT) at the same venue later on Tuesday.