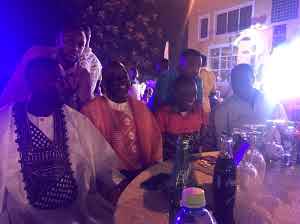 Osei Kwaku, who seems to be the only man standing as the front-runner to succeed Kwesi Nyantakyi also donated assorted items to the two clubs ahead of the hugely publicized game at the Baba Yara stadium in the Garden City.

The items included boxes of water and drinks.Kotoko officials Edmund Ackah and Nana Dankwah and some players including goalkeeper Muntari Tagoe and Fatawu Safiu were in attendance to receive the donation.

The dinner was colorful as most of football arbiters were around to make it a rememberable occasion.

Though Palmer is yet to declare his intentions of contesting the elections, the signs are clear on the wall as a contender to steer the affairs of the FA when the Normalization Committee are through with their works.

Osei Kwaku has contributed significantly to the regional FA's as he continues to woo the grassroots over with his immense personality.

Osei Kwaku, who is the owner of Ghanaian side Tema Youth, is hugely popular among the football aficionados and tipped by many to win by landslide if he decides to contest.

He enjoys massive grassroots support after standing for football during the turbulence period.

The amount realized from the game will be channeled into the Kufuor Foundation.