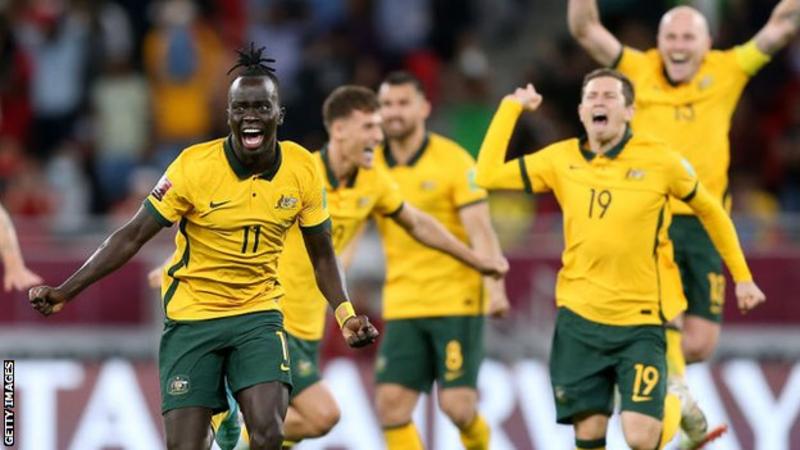 On Thursday night, Awer Mabil will head to the Bernabeu as part of the Cadiz squad to face reigning Spanish and European champions Real Madrid.

After that, the 27-year-old will fly to Qatar to take part in the World Cup with Australia.

For any player, it would be an extremely exciting time. But for Mabil, who spent the first 10 years of his life in a refugee camp, it marks the crowning point of a remarkable personal journey.

Mabil's parents are South Sudanese, and in 1994 they fled the war-torn former British colony to relocate to Kakuma, a refugee camp in Kenya operated by the United Nations. Awer was born a year later, and spent much of his childhood playing football in the only manner possible - barefoot on dirt pitches with a 'ball' made out of scrunched up plastic bags.

The family was able to relocate again to Adelaide, Australia, when Awer was 10 years old, and he quickly found that continuing to follow his childhood passion for football - now playing with proper equipment - was a great way to overcome the communication difficulties he initially encountered while learning English.

His progress was spectacular. After starring for a series of local youth teams as a goalscoring winger, he joined local semi-professional side Campbelltown City, making his debut at the age of 16, and a series of impressive performances saw him quickly snapped up by top-flight Adelaide United.

Mabil continued to shine in the A-League, showing great pace and skill on the wing, as well as an excellent crossing ability and an eye for goal which yielded seven goals in 24 appearances during the 2014-15 season, while still only a teenager.

Scouts from overseas became aware of his talents and in June 2015 he moved to Danish club Midtjylland, where he initially struggled to gain playing time and was loaned out to Esbjerg - also in Denmark - and Portuguese side Pacos de Ferreira.

His breakthrough year came in 2018, with Mabil returning to Midtjylland to become a regular starter and also earning his first call-up for the senior Australia international team, scoring on his debut against Kuwait.

He remained a key player for both club and country, appearing in the Champions League after helping Midtjylland win the Danish cup in 2019 and then the league title in 2020, with Mabil contributing eight goals and six assists.

His endeavours on the field were setting an inspirational example to those hoping to follow in his footsteps, and Mabil also found time to make a practical difference to the lives of fellow refugees by co-founding - alongside his brother Bul - the Barefoot to Boots charity.

The organisation operates in the Kakuma camp that used to be his home, providing education, healthcare and gender equality opportunities as well as its primary focus on football, and earned Mabil recognition from his fellow professionals with the FIFPro Merit Award in 2018.

The charity is chaired by Ian Smith, a board member at his former club Adelaide United, who expressed his deep admiration for the winger when he was interviewed by Australian television network SBS about the impact he has made upon the inhabitants of the refugee camp.

"When they see a young man achieve what Awer has done it brings their dreams to reality," Smith said. "It's a way out, it's a way forward. You can't understate its importance. He is an extraordinary young man. He has the courage of a lion and the heart of an angel."

Mabil showed that courage to memorable effect in June, when Australia faced Peru in an intercontinental final qualifier with a place in Qatar at stake.

A tense, goalless game went to penalties, which advanced to sudden death after one miss apiece. Mabil volunteered to be Australia's first extra taker and coolly slotted home his effort; when Alex Valera's subsequent attempt for Peru was saved by Andrew Redmayne, the Socceroos were heading to the World Cup.

A couple of weeks later Mabil's career took a big step forward when he signed a four-year contract with Cadiz, who were rebuilding their squad after escaping relegation from La Liga on the final day of the season.

His first few months in La Liga have not been easy. Mabil earned a decent amount of playing time in the opening weeks of the season, but Cadiz lost their first five games and he fell behind fellow new signings Brian Ocampo and Theo Bongonda in the pecking order. And now, with results picking up, he has appeared just once from the bench since September.

So there's every chance that Mabil won't see any playing time at the Bernabeu on Thursday - but the flip side is that he will be fresh and fit to represent his adopted country with pride in Qatar, adding another memorable chapter to his heart-warming story.