Karela United has reclaimed its spot on the summit of the Ghana Premier League following the teams draw against Great Olympics over the weekend.

The 2020/2021 Ghanaian top-flight league campaign has gradually shaped up with all 18 clubs having played 10 matches each.

Over the past weekend, the participating clubs were in action and earned various results that have changed the shape of the Premier League standings.

At the end of the matchday, results have seen Bechem United being leapfrogged at the top of the table by Karela United.

The former league leaders suffered a 2-1 defeat to Elmina Sharks and hence drops to fourth on the table.

In line with that, impressive Karela United has returned to the top of the standings with a total of 18 points.

Hearts of Oak and Aduana Stars after earning positive results in their last five matches now sit in second and third on the Ghana Premier League standings respectively at the end of Matchday 10.

Meanwhile, Asante Kotoko drops out of the top four as a result of a defeat to Aduana Stars on Sunday evening.

The record league winners now sit 6th on the log but just two points separating the team on top.

Check out the full table below: 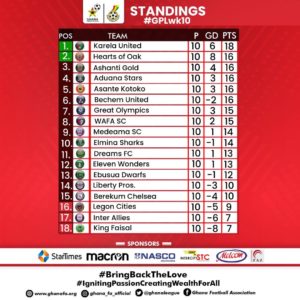