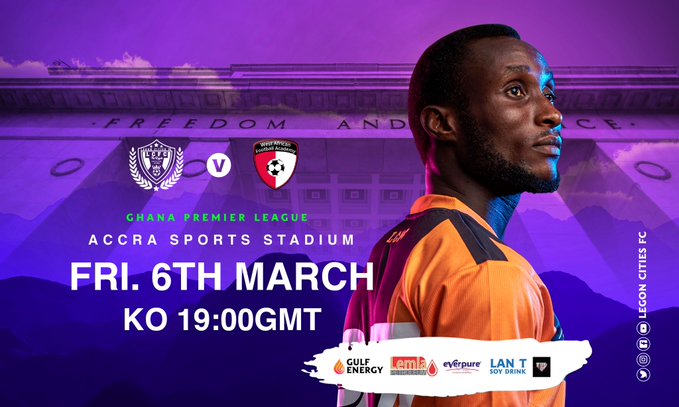 The Ghana Premier League (GPL) will continue this weekend with Legon Cities FC set to host West Africa Football Academy (WAFA) in the first fixture of the matchday.

While as many as 9 matches will be played, there will be two matches played on Friday, three matches on Saturday, and four matches on Sunday.

On Friday night, it will be Legon Cities Fc taking on WAFA at the Accra Sports Stadium in what will be a Match Week 13 encounter. The two clubs have enjoyed different spells since the campaign commenced and are hoping for a good finish to the first round.

The home team, formerly called Wa All Stars, has been inconsistent and continues to struggle for wins. After playing 12 games, the Royals have only 2 wins and has drawn 7 matches while losing 3.

For WAFA, they continue to get the results with their last outing ending in a 6-1 win against giants Obuasi Ashanti Gold at the Sogakope Park.

They currently sit 6th on the standings and with a great chance of breaking into the top four of the table before the first round comes to a close.

Ahead of the meeting between the two clubs, the Academy side looks stronger and is being tipped to pick all the 3 points at the end of the day. That notwithstanding, Legon Cities FC has a fair chance of getting a positive result if they show similar fighting spirit from previous matches.