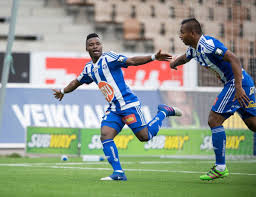 Former inter Allies midfielder Evans Mensah's HJK Helsinki was eliminated from the UEFA Europa League as Riga FC held them to a 2-2 draw at the Telia 5G- Arena.

HJK had a 5th-minute early goal through Petteri Forsell with Vayrynen's second in the 70th minute which came after Rafinha's missed penalty.

Debelko had a brace for the visiting team to end the tie 2-2.

The 21-year-old midfielder lasted the entire duration, he played 65 minutes in their previous tie at the Daugavas Stadions last week which ended 1 all.