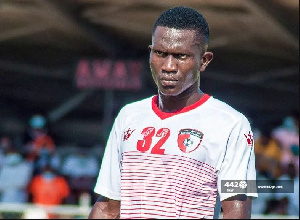 Aduana Stars have completed the signing of WAFA striker Justus Torsutsey ahead of the upcoming season.

The 29-year-old joins the club on a three-year deal and is expected to play a huge role next season for the Dormaa-based outfit.

Torsutsey sealed his move on Monday and is expected to join the club for their pre-season training.

He has been impressive since joining the Academy boys in 2020. He scored 7 goals and provided 3 assists during the 2020/21 Ghana Premier League season.

The forward was impressive in the 2021/22 season despite the club suffering relegation.