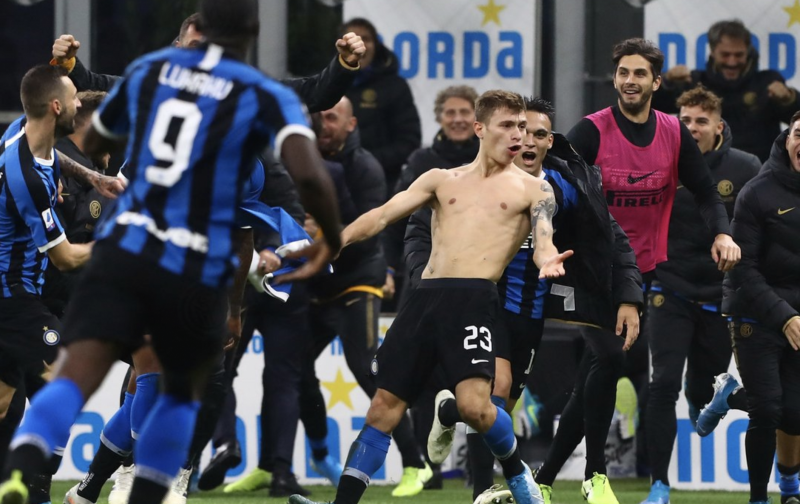 A Nicolo Barella stunner gave Inter a 2-1 win and spectacular comeback against Hellas Verona on Saturday evening at the Stadio Giuseppe Meazza.

A penalty from Valerio Verre gave Verona the lead midway through the opening period, the first Inter have conceded this season. Then just after the hour mark Matias Vecino headed in the equaliser, before Barella smashed into the top corner with just seven minutes left to play.

As a result, Inter move back to the top of Serie A, two points clear of Juventus who play on Sunday evening against AC Milan.

First real chance went to Verona on the break, though Eddie Salcedo’s strike from the edge of the area was easily saved by Samir Handanovic. While at the other end, Lautaro Martinez got on the end of a corner, but could only head over the crossbar.

Then just 17 minutes in Handanovic tripped Mattia Zaccagni in the box and referee Paolo Valeri pointed to the spot. Verre then stepped up to give Verona the lead. A cross from the left was diverted towards goal by Romelu Lukaku, but Marco Silvestri made a good reaction stop. Then moments later the Belgian forward’s angled-drive was just wide of the upright.

Marcelo Brozovic was next to have a go and his attempt to curl one into the top corner bounced off the crossbar.

Inter kept the pressure up and Stefan De Vrij tried his luck from distance, forcing Silvestri into a good save.

Just before the break Inter thought they had the ball over the line, when a cross went past everyone to the back post and from a ridiculously tight angle Vecino diverted the ball towards goal, but Silvestri managed to get across and stop it from going over the line, and it was eventually cleared.

Inter ended the first half with 17 shots on goal. More than any team has had in the opening 45 minutes in Europe’s top five leagues this season.

At the start of the second half, Valentino Lazaro flashed a low cross along the six yard box, and Lukaku hit another chance wide as Inter went searching for the equaliser. Verona were pinned to the edge of their box as Inter tried shot after shot, with Lukaku twice going close and Milan Skriniar heading wide as well. Their resistance was soon broken.

Lazaro lofted a ball into the box and Vecino rose above everyone to head into the bottom corner.

Inter kept up the pressure and Alessandro Bastoni forced a good stop from Silvestri, then Antonio Candreva fired an effort wide.

Lukaku should have netted the winner when a long ball over the defence beat the Verona backline and one-on-one with the goalkeeper, Lukaku tried to lob it over with his head, but Silvestri read it well and gathered easily.

With just seven minutes left Barella let fly from just outside the penalty area and the ball rocketed into the far top corner, sending the Stadio Meazza into rapture.