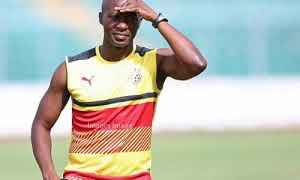 Headcoach of National U-23 Ibrahim Tanko invites foreign players to strengthen the side ahead of Africa Cup of Nations qualifier clash.

The Black Meteors will face Togolese counterpart in the 2019 AFCON first round qualifier match at the Baba Yara Sports Stadium on December 18.Four days later visit Togo for a reverse encounter.

For a halt of football in the part of the West Africa seems to have triggered an invite to the foreign based players to better Ghana's chances of making it to the next phase.

Footballghana.com can exclusively reveal that, the arrival of WAFU winner Isaac Twum, Gideon Mensah, Joel Fameyeh, Majeed Ashimeru and Samuel Tetteh and other players have impressed first deputy coach of the Black Stars, Tanko Ibrahim, a such call upon them.

Winner of this game plays Gabon in the second phase of the 2019 U-23 AFCON qualifiers slated Match next year.