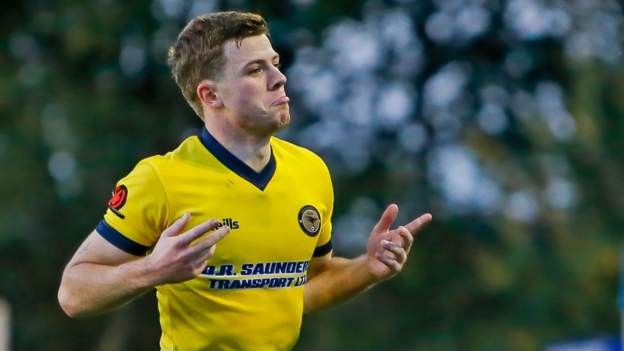 Oliver Pendlebury had spells at Reading and Wycombe before joining Farnborough

Farnborough's Oliver Pendlebury says his side are looking to "write our name in the history books" when they play Wrexham in the FA Cup second round.

The National League leaders are thriving under the ownership of actors Ryan Reynolds and Rob McElhenney.

But Farnborough, 15th in National League South, knocked League Two Sutton out in the previous round.

"Wrexham are a massive club with huge backing, but we're not going there to make up the numbers," said Pendlebury.

The Welsh team have won all 11 of their home matches this season, scoring 40 goals in the process, and are strong favourites for Saturday's tie.

But their opponents are unbeaten in 12 games in all competitions - a run which included a 2-0 triumph at Sutton, where late goals from Michael Fernandes and Francis Amartey took Boro through.

And midfielder Pendlebury, 20, insisted: "We're going there to write our name in the history books and hopefully carry on this run, which I think we can do.

"We're going there to win, so we've got to take our opportunity. Belief is so important in football. Anything is possible and I think we proved that against Sutton."

Farnborough manager Spencer Day is also bullish about his team's chances of causing another upset.

They absorbed first-half pressure at Sutton before coming on strong in the later stages - and Day believes that they can also cause Wrexham problems.

"Wrexham are a great club. Let's just not forget that we're 12 unbeaten in all competitions, have beaten a League Two side away, have got some fantastic players and it's the FA Cup," Day told BBC Radio Surrey.

"If you were talking about the league, where they've won all their [home] games this year, averaging nearly four goals a game, you could sit there and say, 'Oh well, we're goners.'

"It is really the old David v Goliath [story] to a large degree. Normally David is the Welsh, but this time it's us.

"But we've got to believe. We've got some fabulous players and are on a fantastic run.

"We know we're going to have to play very well. But it's a one-off game and, yes we're massive underdogs, but we'll have a huge amount of support there and are looking forward to it.

"We're not out of the FA Cup yet. It's all too easy for people to say, 'You've got no chance.' Yes, on paper, but it's the FA Cup and how many times has the FA Cup thrown up results where the form book goes out?

"This group are not interested in making up the numbers. We're interested in really giving it a go, which is one hell of a task but one we will embrace."

Promotion is the main aim for boss Phil Parkinson, who took over at the Racecourse Ground last year.

But the prospect of drawing a Premier League club in the third round means there is a plenty at stake for the hosts this weekend.

"Being in the third-round draw is huge for everybody connected with the club, because it brings real excitement," Parkinson told BBC Sport Wales.

"We've got a great history in the FA Cup and it's important that we respect that, and the way we do that is the manner of the performance.

"Of course the league is the most important thing for us. However, we've got into round two and now there's an opportunity to get into round three and draw one of the big teams.

"That would be great for the profile of the club and we're going to go all out to get that."