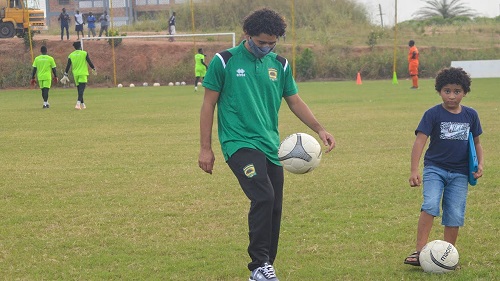 Brazilian midfielder Fabio Gama has set sights on winning titles including the Ghana Premier League and CAF Champions League with his new club Asante Kotoko in the coming seasons.

The 28-year-old arrived in the country on Monday evening, having joined the Porcupine Warriors on a two-year deal.

He is a former Brazil national youth player, having represented the South American nation at U17 and U21 levels.

Gama received a hero's welcome when he made his maiden appearance at the club's training grounds, Adako Jachie training complex on Tuesday.

"I will train individually for now because I'm not yet 100% fit. But as soon as I get ready, then I will start training with the first team," he told Takoradi-based Connect FM.

"I'm being frank, I want to be a champion here. I didn't come here just to play but to a winner- to win the domestic titles and CAF Champions League with Asante Kotoko. I can now play 15, 20, 30 minutes for the mean time and hope to be fit to help my teammates have a great season."

Gama joins the list of Brazilian players to have signed for Kotoko in recent times, following the likes of Gleisson de Souza Ferreira in 2005 and Hermes da Silva in 2013.

Kotoko started their season with a 1-1 stalemate with Techiman Eleven Wonders at the Accra Sports stadium last Sunday.

The Reds will take on Berekum Chelsea at the Golden City Park in matchday two of the ongoing season on Sunday.