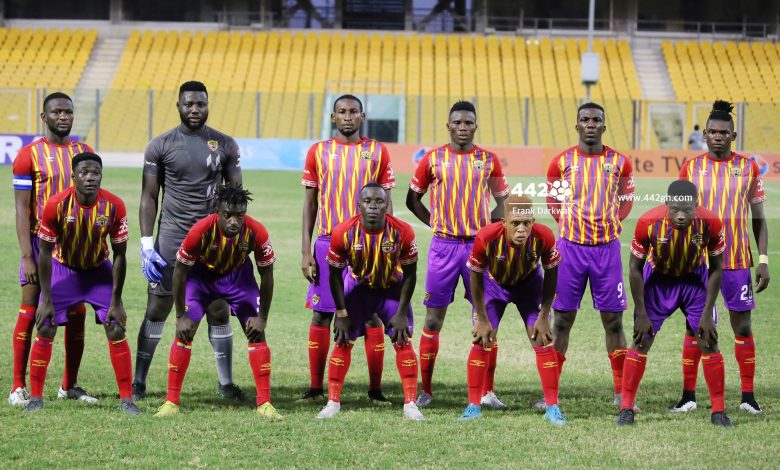 Hearts of Oak look to make it to round two of CAF Champions League qualification as they host Guinean side CI Kamsar in a one-legged tie at the Accra stadium.

The game will move straight to penalties if a winner is not found during regulation time. Check out the live updates below:

1 min: The referee blows his whistle to start the game.

5 mins: CI Kamsar taking the game to Hearts at the start here. Impressive stuff so far.

10 mins: The hosts are gradually growing into this one. They are controlling possession.

25 mins: The Kamsar goalkeeper goes down after clashing with a Hearts of Oak player. He has been attended to by the medical team and looks good to go.

40 mins: A promising free-kick for Hearts. Caleb Amankwah disappointingly failed to convert, hitting the wall with his effort.

45 mins: We have two minutes left to the end of the half. Hearts are now dominating the game and need a goal to settle it.

45 +2 mins: Great save! Richard Attah was called to action after a cross found the head of a Kamsar player who directed it towards goal. A brilliant stop. It was also flagged for offside.

45 + 2 mins: The first half comes to an end. Hearts started slowly but became better as time went by.

46 mins: Second half begins. Hearts will hope to break the deadlock.

48 mins: Big chance! Daniel Afriyie was left wide open as a low cross came to him but the attacker made a mess of his shot.

59 mins: Hearts of Oak are struggling to create clear cut chances here. That must change if they want to win.

66 mins: A CI Kamsar player is down in pain. He is being attended to whilst Hearts prepare to take a corner.

67 mins: Emmanuel Nettey comes off for Asubonteng as Hearts make their first change.

71 mins: Hearts of Oak find the net but the referee disallows the goal after the opposition goalkeeper was fouled in the buildup.

72 mins: CI Kamsar with a change. Martin Antwi comes on for Cisse.

73 mins: Hearts of Oak find the net once again but the goal is ruled out for offside.

74 mins: Raddy Ovouka has been booked for diving in the penalty box.

77 mins: Big save from the Kamsar goalkeeper to stop a shot from Hearts of Oak.

82 mins: Free kick in a promising area for Hearts of Oak. They should make it count here.

85 mins: GOAL! Kofi Kordzi has found the net from the free kick. A brilliant shot by the striker. Hearts of Oak finally find the breakthrough. 1-0 to the hosts.

93 mins: GOAL! It's all over now. Hearts of Oak double the lead and this time it was a power driver from from Salim.

94 mins: The game comes to an end! Hearts of Oak have moved on to round two of the qualifiers.