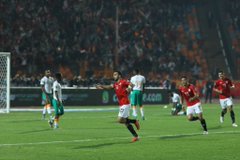 North African side Egypt has defeated Cote d’Ivoire 2-1 this evening after extra time at the Cairo International Stadium to emerge as Champions of the 2019 CAF U-23 Africa Cup of Nations (AFCON) tournament.

Just as expected, the hosts took control of the match right from the blast of the kickoff as they dominated play.

Following a series of several attacking plays, Karim El Eraki shot Egypt into the lead on the 37th minute. They could have netted more but their inability to convert half-chances meant that they went into the break with just a goal to the good.

It was more of the same in the early part of the second half with the Ivorians constantly made to chase the game.

With the match heading to its conclusion, Cote d'Ivoire upped their game and managed to find a way past the host nation with Aboubacar Doumbia scoring to restore parity.

The final eventually ended 1-1 and at the end of the 90 minutes and had to head into extra time to find a winner.

The first 15 minutes ended with neither side unable to find the vital equalizer. A resolute performance in the second 15 minutes saw Egyptian captain Ramadan Sobhi getting the crucial goal that eventually ended up being the winner to hand the side the title.