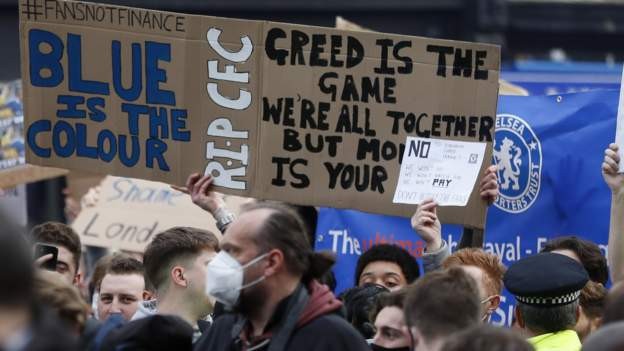 Around 1,000 Chelsea fans gathered outside Stamford Bridge to protest plans for a new European Super League

Chelsea are to introduce a supporter presence in the form of three "supporter advisors" at club board meetings from 1 July.

The Blues were one of 12 clubs to join the controversial European Super League (ESL), only to withdraw 48 hours later following a furious backlash.

Owner Roman Abramovich and the board said they "deeply regret" the decision.

Chelsea said the move "will allow the club to discuss and seek advice on a broad range of matters".

The Premier League club is to consult with its Fans' Forum and non-official supporter groups regarding the process for selecting the supporter advisors.

"Criteria for nominations as well as final selection will ensure that the supporter presence is representative of our supporter base generally and is inclusive and diverse. A new selection will be made before the start of each season," Chelsea added.

Chelsea fans protested against the decision to join the proposed ESL outside Stamford Bridge before the club's league game against Brighton on 20 April. The club announced it would withdraw from the competition later that day.

The supporter advisors will not have voting rights or be allowed to participate in meetings relating to players, staff or the academy.

Liverpool supporters' group Spirit of Shankly (SOS) said on Tuesday that a "positive" first meeting with chief executive Billy Hogan and board members had taken place, in which they submitted a four-point plan to improve fan engagement.

Among the proposals is for two SOS representatives to be introduced at board level to advise on fan issues, plus a commitment that any costs in relation to the ESL involvement will be funded solely by the owners.