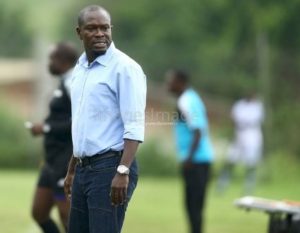 Former Dreams FC Coach has agreed a two ear deal with Ashantigold after helping the club stay in the Premier League last season.

The former Black Stars Captain was contracted midway in the season to help the miners avoid the drop following a terrible start to the season.

Akunor helped the club survive relegation and has been given a two year contract to continue his good work with the club.

The former Hearts of Oak Coach will officially take charge of the team next week where he will be involved in the team’s preseason training.

The 43 year old, having refused to extend his stay with Dreams FC has now been fully employed to lead AshGold for the next two seasons.

He previously managed Eleven wise before joining Hearts of Oak and then eventually signed for Hearts of Oak having briefly handled the Ghana U20 side.