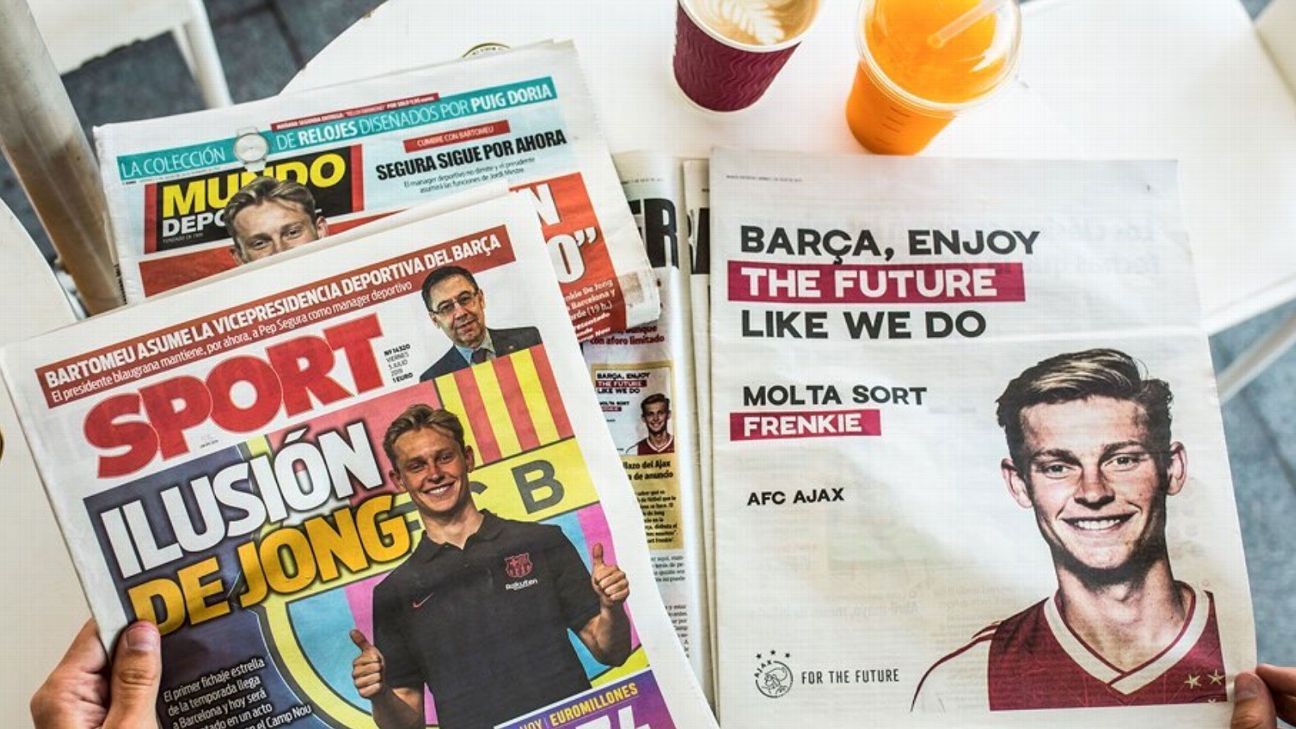 Forget Twitter, ignore Facebook, Insta-what? Every now and again, clubs and players turn to the traditional newspaper to get their message out to the masses.

The Toe Poke Daily is here every day to bring you all the weirdest stories, quirkiest viral content and most magnificent merch that the internet has to offer, all in one place.

It's not transfer deadline day, but here are some key signings from Aug. 31

It would appear that seeing Donny van de Beek joining Manchester United has been a bit of a wrench for everybody at Ajax Amsterdam, who have watched the midfielder grow up over the course of the last 13 years.

So much so, in fact, that Ajax chief executive Edwin van der Sar felt compelled to take out a full-page advert in the Manchester Evening News to say goodbye to Van de Beek, who completed his £40 million transfer to United on Wednesday.

Van der Sar, who played for United for six years between 2005 and 2011, made sure to inform his former club that they were getting a very special player.

After 13 years, I say goodbye to the club that played a huge part in my development. I thank everyone who made this move possible. Time has come for a new chapter, but @afcajax and the fans will always have a special place in my heart. I will keep following you! Donny ❌❌❌ pic.twitter.com/qvJIdrqhiF

"Dear Manchester United fans, I hope you're doing well," Van der Sar wrote in his open letter. "It seems our paths have crossed again. One of ours is joining you this season. And like so many players before him, he's been with us since he was just a little boy.

"Please take good care of Donny, and help him dream."

Of course, the full-page statement in a national publication has become a tried and trusted strategy to express thanks to all and sundry, with plenty of clubs and players adopting the tactic.

Here are a few more notable examples of the approach, some more humble and heartfelt than others.

When Zlatan arrived in MLS in 2018 he of course saw fit to break his own news in typically bombastic fashion.

The Swede took out a full-page advert in the LA Times with a simple, one-line greeting to his new adoring public: "Dear Los Angeles, you're welcome."

Zlatan Ibrahimovic has taken out a full page advert in the @latimes announcing his arrival at LA Galaxy. Classic Zlatan. pic.twitter.com/TeFXM2De7e

Ajax have previous themselves, with the Dutch club taking out a full-page advert in a couple of Spanish newspapers to wish Frenkie de Jong well at Barcelona after his big move last July.

The Swiss club purchased a full-page advert in the country's biggest newspaper, Blick, to congratulate their Young Boys on winning the league title.

"Please take care of the trophy, we would like to win it back in good condition," the magnanimous message read.

On leaving Manchester City in 2013, manager Roberto Mancini made sure to thank fans for three-and-a-bit years of loyal support with a full-page message in the Manchester Evening News.

After an inspired clean sheet against Liverpool back in 2014, David de Gea received a rare tribute from Norway's largest sport paper, who dedicated their entire front page to the impervious Manchester United goalkeeper.

Edinson Cavani purchased a full page in Corriere dello Sport to personally thank Napoli fans for the "1,000 days and 104 special moments" they'd shared together (104 being his goal tally for the club) shortly after his big move to Paris Saint-Germain.

Quite what he was doing with his hands in the accompanying photograph is anybody's guess.

A little less illustrious perhaps, but Adam Lallana did likewise in the Southern Daily Echo after bringing his 14-year association with Southampton to an emotional end with a transfer to Liverpool in 2014.

When Leicester won the Premier League title in 2016, locally based snack brand Walkers Crisps took out a full-page (and ever so slightly disturbing) advert in The Sun to remind Gary Lineker of a little wager he'd previously made about presenting Match of the Day in his underwear.

The kit is coming off for @GaryLineker next season! pic.twitter.com/0x5v0Ksdxz

Germany put international rivalries aside in the wake of Euro 2016 by buying a full page in L'Equipe to thank France for being such gracious hosts.

This was after Les Bleus knocked Die Mannschaft out of the competition in the semifinals.

The Germans have taken a full page ad out in today's L'Equipe to thank the French for their hospitality. #Euro2016 pic.twitter.com/XnumTblJWq

After seeing home ticket sales pass the one million mark during the 2017-18 season, the Inter Milan top brass deemed it only right to thank their fans via a huge full-page display of gratitude in Gazzetta dello Sport.

Inter took out a full page ad in today's Gazzetta dello Sport to thank for their fans for the highest attendance at home games in Serie A this season- over 1 million tickets sold. Very impressive pic.twitter.com/JZt1ghJcXG

French side Amiens were so perturbed by the nature of their relegation from Ligue 1 last season that they took out an entire page in L'Equipe to complain about it.

Amiens take out full page ad in tomorrow's edition of French sports daily L'Équipe, demanding that they are not relegated from Ligue 1 after sitting 4 points away from safety when the LFP decided to terminate the 2019/20 campaign despite there being 10 matches remaining. pic.twitter.com/FdzOdYaOoK

Celtic supporters went to even greater lengths than usual to rile Rangers fans with a full-page advert in the Sunday Herald newspaper ahead of a Scottish League Cup semifinal tie between the Old Firm rivals back in 2015.

The barbed message poked fun at Rangers' financial plight and subsequent liquidation three years earlier, with the mischievous Bhoys fans insisting their opponents were not Rangers at all, but a new entity entirely.