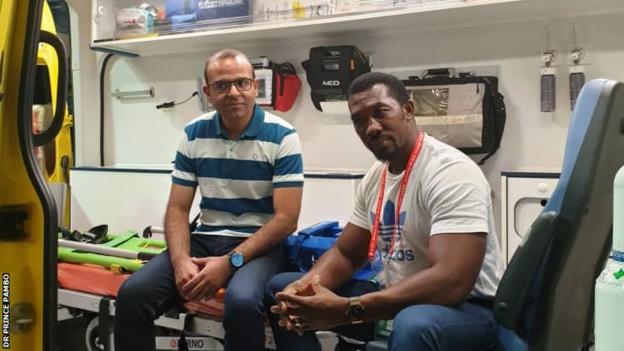 The Confederation of African Football (CAF) medical expect Dr. prince Pambo is undoubtedly confident that a collapse like Christian Erikson’s could be dealt similarly at the Africa Cup of Nations (AFCON).

His comment comes following the collapse of Danish star Christian Erikson in the ongoing Euro Championship.

Last Saturday, Erikson suffered a sudden cardiac arrest in the middle of a Euro 2020 tie against Finland, his life was saved thanks to the swift actions of his team-mates and medical staff.

However, the Ghanaian who serve as member of the CAF medical team says situations like that of Erikson can dealt with on the African continent especially at AFCON.

Dr. Prince Pambo remains concerned about whether the measures in place for local league matches are adequate to deal with such emergencies.

"I can confidently tell you that if this happened at any of our venues during an Afcon - we would have been able to give the same level of care that Eriksen got in Denmark ," Dr Pambo told BBC Sport Africa.

"The simple reason being that Caf has a group of experts in the medical committee - made up of sports physicians and emergency medical personnel and during Afcons such doctors are deployed to all the venues.

"Normally you go two weeks ahead of the tournament and you inspect all the medical infrastructure available at each venue. There are times when you conduct training for all the paramedics who will be present there.

"You also take into consideration the distance between the stadium and the closest hospital and you also go and have interaction with the emergency medical team at the hospital.

"Every venue is always going to be equipped with a number of AEDs (Automated External Defibrillators) - so I can assure you that if this happened during an Afcon he would have had the same level of care."

AEDs or Automated External Defibrillators are portable electronic devices that automatically diagnoses life-threatening cardiac problems and can treat them through defibrillation, the application of electricity to re-establish an effective heart rhythm.

The doctor led Caf's medical team in Suez during the 2019 Africa Cup of Nations in Egypt and has also worked at many African Champions League and Confederation Cup Matches as well as other continental tournaments.