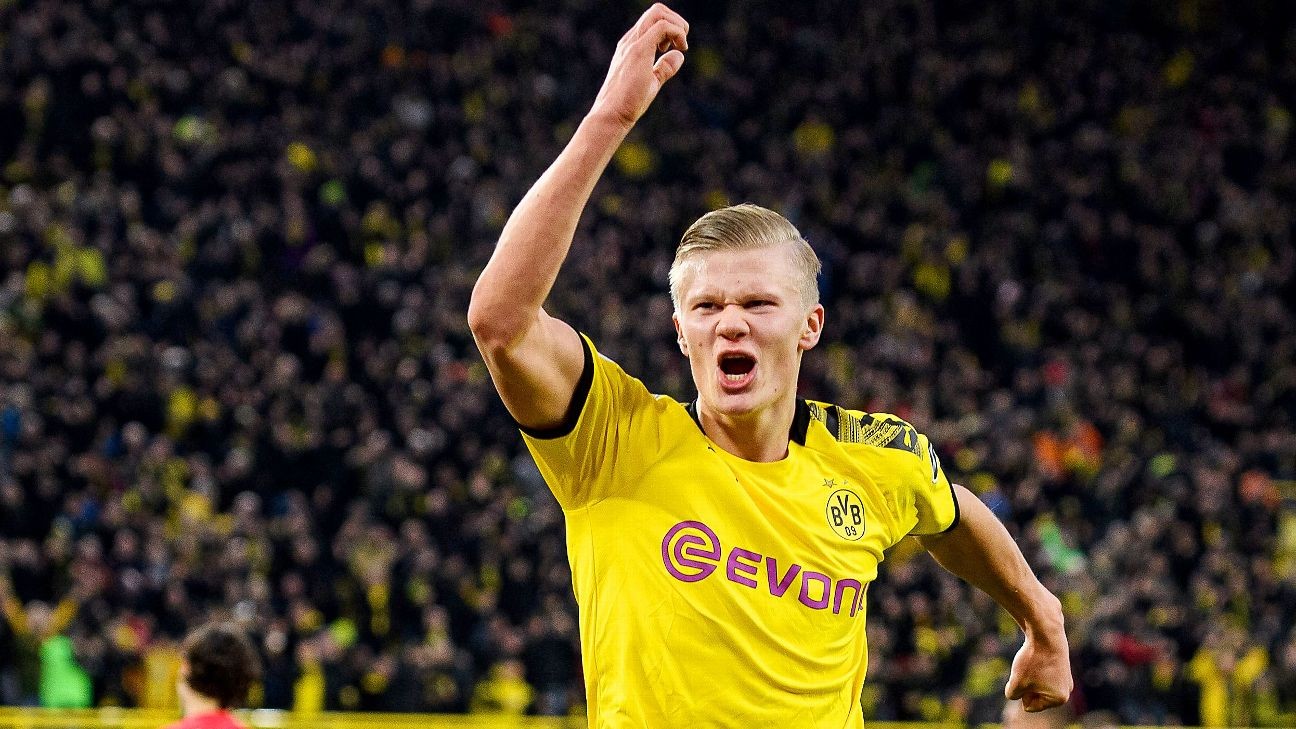 Heavily tipped to join Manchester United in the January transfer window, Erling Haaland -- football's hottest prospect this season -- instead chose Bundesliga heavyweights Borussia Dortmund as the best place to continue his football education. It has turned out to be a smart decision, with no let-up to his remarkable goal-scoring streak. So what's behind the 19-year-old Norwegian striker's sudden rise to fame, can he sustain his present run of performances, and can he become the new Robert Lewandowski or Falcao, the centre-forward that defines the 2020s?

Although he really came to the attention of the worldwide football audience only toward the end of 2019, Haaland, son of former Leeds United and Manchester City utility man Alf-Inge, had been a hot topic on the European scouting circuit for quite some time. He made his professional debut at 15 in spring 2016 for his local club Bryne, in the second level of Norwegian league football. He was quickly snapped up by top-league side Molde FK, scoring the winner on his competitive debut. At only 17, he became a key part of Norway's U19 team and it was after scoring four goals from three matches in a U19 European Championship qualifying tournament in early October 2017 that European top clubs started to take a special interest in this Scandinavian teenage man-mountain.

- Ogden: Meet Erling Haaland, the kid scoring for fun
- Haaland gets a gift from his idol, former Swansea striker Michu

I've worked for more than 20 years across Europe in a variety of sporting roles and, as a Norwegian national myself, in the days following that tournament, old friends and contacts started calling, all wanting the lowdown on a player they hoped they'd been the first to spot.

Within a matter of weeks, an array of European top clubs were on Haaland's trail and from this point on, it seemed as though the boy's closest adviser, his father "Alfie," had his hands full just keeping suitors at bay. Despite making several club visits across Europe, it became clear that young Haaland -- coached at the time by Ole Gunnar Solskjær at Molde -- would leave Norway only for a club that granted him status as a first-team player. Moving to an academy, as his compatriot Martin Odegaard did when he left Stromsgodset for Real Madrid Castilla a few years earlier, was flatly ruled out. The confident youngster wanted to learn while playing competitively.

Haaland's having an all-world season, having scored plenty for RB Salzburg and then continued that remarkable form in the Bundesliga with Dortmund since January.

Now, a mere 14 months on from Haaland leaving Molde for Red Bull Salzburg in January 2019, Erling can comfortably offer his father the odd complimentary ticket for a Dortmund home game as a thank you for an early career path managed to perfection. The year spent in Austria gave Haaland the ideal platform to adapt and learn at the stricter, but still manageable, ultra-professional Red Bull set-up. And although he surely would have liked to have been more involved during his first half-season at Salzburg -- he featured in only two league games -- the slow introduction eventually paid dividends.

Following a sensational Golden Boot performance for Norway at May's U20 World Cup that included a record-breaking nine goals in one game against Honduras, his rapid improvement of form and ability culminated in a stunning eight goals in five Champions League outings for the Austrians during the second part of the year, including a hat trick on his CL debut against Genk. It was evident from that incredible showing that the 19-year-old had already outgrown Austrian football, and he was soon being linked with just about every top club across Europe -- especially Manchester United, where his former coach Solskjær was now the manager. Yet despite being highly coveted by the Red Devils, he decided his next move would be to the Bundesliga.

Choosing Borussia Dortmund over potentially more glamorous destinations has proven to be a cunning move by the Haaland family who, possibly to cement his growing global recognition, have "internationalised" Erling's surname from Haland to Haaland, losing the tricky Norwegian character å. The Bundesliga is a haven for attacking football and this Dortmund side, with its quick and attack-minded wide players, intelligent attacking midfielders and wide forwards whose movement creates space, are the perfect conditions in which a powerful and dynamic centre-forward can prosper.

Haaland has taken full advantage, scoring a 23-minute hat trick on his Bundesliga debut and continuing his blistering form in the Champions League. While Cristiano Ronaldo won't be looking over his shoulder just yet, the Portuguese's record of 128 CL goals could well be under threat if Haaland carries on in the same vein. After all, it took Cristiano nearly 30 games before he got off the mark in the CL proper. Haaland has managed 10 goals in his first seven appearances.

Haaland possesses outstanding physical characteristics: the stunning pace (and change of it), the remarkable power, the formidable left foot. And through an ever-improving positional knack of popping up in the right place at the right time, and the intelligence to pull away from his marker at the right moment, the evidence of a sophisticated football brain is also starting to show.

His appearances at Champions League level have boasted the assertiveness of someone who genuinely believes he deserves to rub shoulders with the best players in the game. Perhaps we have to turn back time to Wayne Rooney's England performances at Euro 2004 to find a teenager imposing himself like this at the very highest level.

Though it's beyond any doubt that his youthful enthusiasm is a huge driving force, it's equally clear Haaland has developed radically and rapidly over the past six months. From previously being somewhat negligent in his pressing game and often running out of steam toward the end of games, he now offers incisive and energy-consuming runs and movement throughout the 90 minutes. This was particularly visible in last weekend's away win at Werder Bremen, in which he came to life in the last half hour.

Given the Norwegian's absurdly productive past six months, it may seem somewhat ridiculous to point out any shortcomings in his game, but there's certainly margin for improvement in his aerial game. One could argue that the 6-foot-4 Haaland plays the game like someone who's much shorter in size; predominantly relying on his pace, balance, determination and willingness to take on opponents on the ground rather than in the air. In fact, to date he prioritized the art of directing the ball through a well-coordinated head movement, which makes you wonder what an even bigger menace he might turn out to be once he develops the appetite for converting crosses as well.

To further improve his hold-up game, there's also work to be done on his first touch. Being able to control the ball neatly and quickly upon receiving is a fundamental skill for a complete centre-forward and -- as bizarre as it may sound when it comes to someone in the process of breaking goal records -- one that has to become a stronger feature of his game if the boy wonder is to turn into the complete centre-forward. And while Haaland already looks a lot more comfortable as part of Dortmund's quick combination play in the last third, he still needs to become sharper in his layoffs and, when needed, learn when and how to hang on to the ball to win a free kick or gain time to help his teammates catch up with him.

Before writing this column I caught up with a highly recognized sporting director, was the first to call me about Haaland in late 2017. Though he's not keen on having his name on record, he was happy to add: "I'm not surprised where Haaland is today, but I'm surprised that he got there that fast. In a way he's still the kid that blew everyone away at the FIFA U20 World Cup, and even before, only even faster and even more powerful.

"I've no doubt that Haaland has reached the top level to stay, but it will be interesting to see how he deals with adversity: he's on an incredible streak now, but it won't just go on and on. That's simply not possible. If you take the top out-and-out centre-forwards of the past 20 years, guys like Lewandowski, Zlatan Ibrahimovic and Falcao, I would say Haaland is some way off their levels of close control and technical finesse. On the other hand, it took them well into their 20s to arrive at the same competitive levels as Haaland. And the physique of the Norwegian is something out of this world."