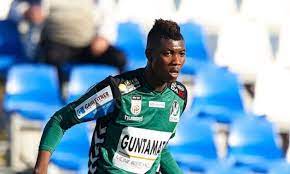 Kennedy Boateng has played 113 competitive games in the SV Ried jersey since summer 2017. It is quite unlikely that there will be a 114th game.

The 24-year-old is unlikely to extend his contract with the Bundesliga club, which expired in the summer.

"We made him a very fair offer. But we can't keep up with his demands," says sports director Wolfgang Fiala in the "OON".

According to reports, a number of teams are interested in the former West African Football Academy left-back, with his agent presently discussing with clubs in France, Belgium, and Denmark.

Boateng has excelled since joining the club on a permanent basis following a loan spell at LASK Linz.

This season, the former West African Football Academy left-back has made 22 appearances for the team.

Kennedy Boateng joined LASK from WAFA in the 2016/17 season before being loaned out to Ried after failing to get into the LASK squad.