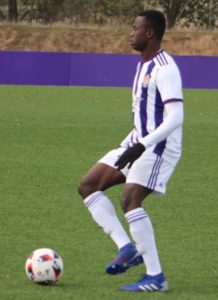 Footballghana.com can exclusively report that Spanish La Liga side Real Valladolid has completed the signing of Ghanaian youngster Isaac Amoah on a permanent contract.

The player who is joining from African Football Talent Academy has been on trial with the Spanish club in the last couple of weeks and has now been signed after impressing.

Isaac Amoah is now the fourth teenager from Ghana to join Real Valladolid. The other players include Seydou Saeed, Baba Alhassan, Victor Asamoah.

Their senior, Mohammed Salisu who has already broken into Valladolid’s first team is on a run of excellent form in the Spanish La Liga where he has gradually established himself as one of the best players.