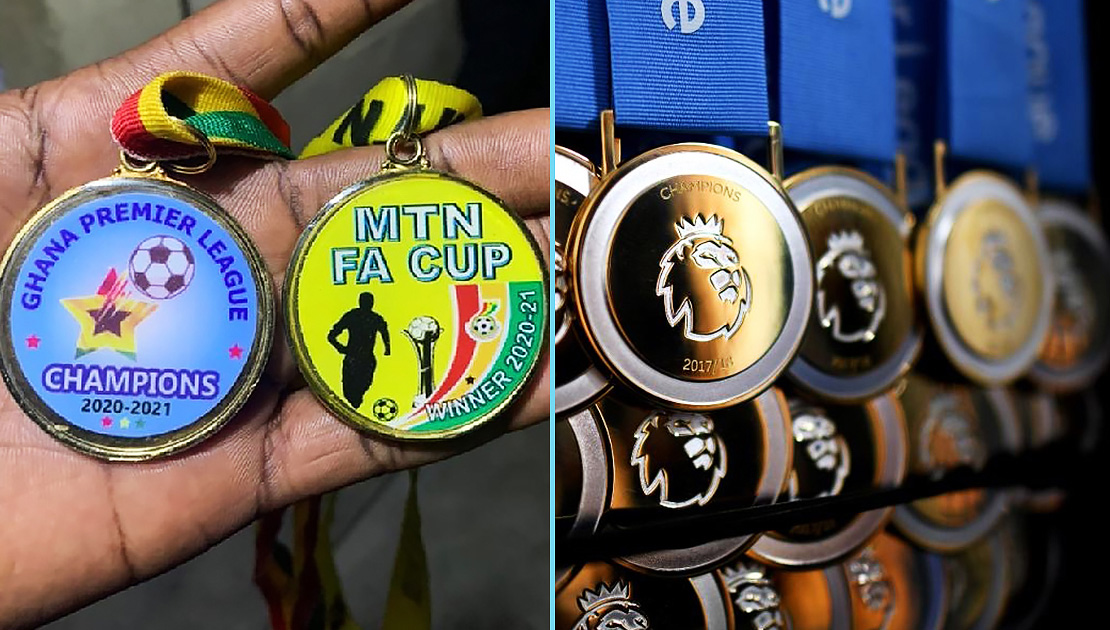 Showing the low-quality looking medals given to 2020/21 Ghana Premier League (GPL) and FA Cup champions, Hearts of Oak, an inscription on a WhatsApp image addressing Kotoko fans caught my attention.

“Guys, remember this what we are fight for” it said. I couldn’t hold back laughter.

People on social media come up with all manner of things. Some publications evoke laughter, others trigger anger. Certain posts would drive you to admire the intellect of the person behind a publication while others would simply put you off the account.

I’ve held that, those who passionately follow the GPL, whether they’re fans or journalists, don’t love to focus on the negatives as some friends at the Ghana Football Association (GFA) erroneously assume. Rather, managers of the GPL, clubs and their operatives; not the media, invariably create fertile grounds for bad press and those who want to use that ammunition to fire the FA or league managers, choose to do so.

This is what the case is usually. It might appear simplistic but that’s the truth. It’s possible the media exaggerate at times but then I don’t for example know media outlets that fabricate incidents of GPL violence. I haven’t come across  media concoctions on how juju and its attendant primitive acts take centre stage at some venues.

The media only mirror what happens at match venues. If we want the media to bury GPL negatives, there’s a way to do it. It doesn’t just happen. Some thinking, some strategy, some good plans mooted behind the scenes by the league managers and media outlets must take place. It should be deliberate.

It’s so easy to ask the media to highlight GPL positives but when and where key actors in the league have themselves put the positive events and issues on the back burner, how’s the media blamable? The GPL managers haven’t been intentional on management of the game. I’m sorry but they’ve in practice left the administration of the GPL on the shoulders of club administrators whose everyday preoccupation is to ensure survival of their clubs.

As a result, what aids the survival of their clubs is what's importnat to them even if it breaches rules. And when we expect the GFA to lift management standards, they rather aggravate it. Example: last season’s winners’ medals. How could the GFA present those visibly cheap medals and assume there would be no public outcry? Is that what likely league winners Asante Kotoko would also have?

It’s the message the image I referred at the beginning of this piece sought to send across. The medals issue came up last season. It’s being revisited because the GFA should be told the quality of those medals ultimately impaired the reputation of the GPL. If we can’t handout big cash rewards to the winners can’t we also secure quality medals?

I’ve no to-do or must-do list for the GPL managers except to reiterate the point that, they’ve to be intentional how to handle the so-called GPL product. Being intentional is about ensuring that, what’s done at any level of the GPL management, enhances the image of the product – not needlessly exposing it to public ridicule.

This is for the league managers to think about.