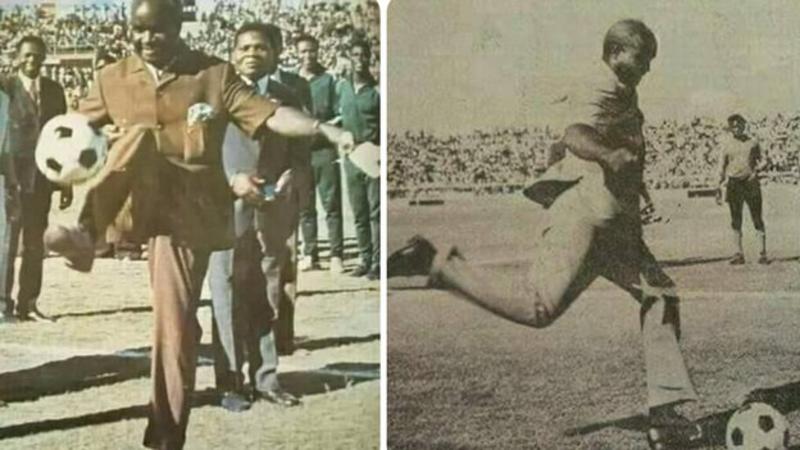 The late Kenneth Kaunda, Zambia's first president will not only be remembered as one of the last of the generation of African leaders who fought colonialism but also for his love of sport.

The 97-year-old passed away on Thursday after being admitted to a military hospital in the capital, Lusaka, on Monday suffering from pneumonia. His aides said he did not have Covid-19.

His support for the national team helped them develop into being a force to be reckoned with on the continent and with that success the side soon became know as as the 'KK11' in his honour.

Early on in his political career he realised the football was a tool that could aid his work toward creating a country devoid of tribal politics and to promote his constant theme of 'One Zambia. One Nation.' He succeeded.

Indeed to symbolise his early pan-African credentials, among Zambia's opponents for the first Independence Day celebrations in 1964 at the recently completed Independence Stadium were Ghana, the team of his close ally and mentor, Kwame Nkurumah.

His passion for football also saw his first cabinet frequently out on the football pitch playing in matches that gave them the opportunity to engage the public in a light-hearted manner.

He saw it as a way of showing that they were still in touch with the community while and Kaunda himself surfaced at other matches as a referee.

Kaunda was ever-present for high-profile matches when the national team played, and frequently for local cup competitions and Independence Day celebratory matches.

He strategically chose encounters that would have huge audiences and maximum impact on the public if the team won.

Yet, he also genuinely loved the game as could be seen by him going out of his way to make sure that the national team had equipment and financial support to fulfil its programmes, even when resources had become scarce as the economy tanked.

He regularly invited the national team to State House, his official residence, where he personally dished out dinner plates to the players, usually after a successful outing in major tournaments.

The players frequently spoke out about the great pride they took in being served with crockery bearing the national coat of arms.

In an era when football had yet to provide the monetary earnings the game does today, these visits to State House were considered a great honour.

He even stepped in to allow some fans to watch matches without tickets as he declared the hill outside the old national stadium should be open to the public to allow those that grabbed the highest points a limited view of the pitch.

Before that police had prevented fans from using the vantage point and it was soon renamed 'Humanism Hill,' after his self-invented philosophy, Humanism, in which he placed "Man at the Centre of all Activity."

Kaunda's love of the game and direct involvement with the national team led to trickle-down effect that gave football a privileged place in the budgets of state-run companies.

The mining conglomerate Zambia Consolidated Copper Mines, ZCCM, had a major team in all the towns where copper mines were run.

These teams often dominated the leagues and most of the country's top football players came from them. The main railway utility, Zambia Railways owned and funded the great Kabwe Warriors team of the seventies.

The military team, Zambia Army, later Green Buffaloes, was directly supervised by the Army Commander. The air force and police also contributed significant portions of their budgets towards football clubs in the elite league.

Zambia's famous football commentator Dennis Liwewe, in line with the trend at the time, named the national football team, the KK11, using the initials that became popular with the public.

His commentary was often laced with military terminology as he lavished praise on the role Kaunda and his government had played in the teams' heroic successes.

He would even speak directly to the president over the microphone, with phrases glorifying the team informing him, 'Your Excellency, your soldiers are returning tomorrow after conquering in the name of the Zambian Revolution!' when they achieved a significant win or returned with a trophy.

Other sports, though less popular, also had a role to play. The successes of teams at the Commonwealth or Olympic Games also gave those achievers a place at the state house dinner table and national honours on Heroes and Unity Day and Independence Day commemorative holidays.

Medals were pinned on the chests of the biggest names in sport, among them including footballer Godfey Chitalu, boxers Lottie Mwale, and Keith 'Spinks' Mwila, as well as Dennis Liwewe for his role in football broadcasting.

As frontline countries began to win their Independence, Zambia graced their celebrations and were the favoured opponents for these special occasions.

Zambia took on Zimbabwe in 1980 and Nelson Mandela's inauguration in 1994 despite that being three years after Kaunda had left office.

The invitations were a way of acknowledging the role both Kaunda and Zambia had played in their Independence struggles. Often, the home team won, irrespective of form. It was regarded bad form to sour national celebrations.

Yet, as Kaunda's popularity began to wane after 27 years in office, it would ironically be football that showed a significant crack in public sentiment towards Kaunda.

On 4 July 1991 as Zambia faced Madagascar in an Africa Cup qualifying match, the arrival of his motorcade was met by a shower of fruit, paper wrappers and other debris as he was driven to the main stand.

It was an unprecedented display of dissent by a public worn down by economic difficulty, restrictions on freedom of expression and the worldwide wind of change after the end of the cold war.

A year later, Kaunda was swept away in a tide of electoral change as the opposition party MMD won by a landslide.

They would do everything in their power to keep him out of sight of the football-loving public, wary of his potential to reignite his place in the hearts of fans if the team fared badly.

Today with Zambian football foundering, the older fans look back with nostalgia to an era when football grounds overflowed, when Zambia could hold its own against the continents best, and Kenneth Kaunda's pre-kick off routine set the stage for a team that for the most part, hardly lost at home.

The same fans, however, will forever remember that 21 years after Kaunda left office, Zambia lifted the 2012 Africa Cup and despite his advanced age, KK, was in Gabon to come back with the trophy!