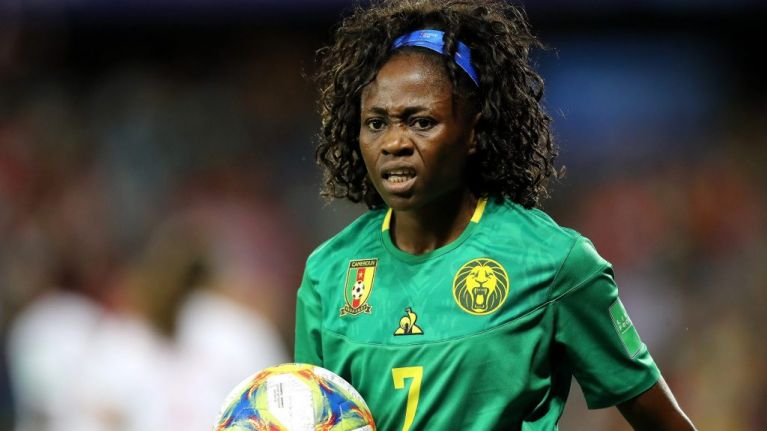 She dons the armband of one of the toughest women’s football teams in the continent. Gabrielle Aboudi Onguene shines with her consistency and desire.

At 31, the three-time CAF Women’s Player of the Year nominee says she is still hungry for success with Les Lionnes.

From humble beginnings in the streets of Douala to her ascension to the captaincy of the Cameroonian women's national team, the indefatigable Onguene, nicknamed Luis Figo has continued to dazzle with her talent. CAFOnline.com traces the journey of the forward who has continually become a darling of football fans across Cameroon.

Born and raised in a family of nine, Onguene grew up in the Fret Aeroport Village, a popular district of Cameroon's economic capital, Douala.

Like most young Cameroonian footballers who are faced with the lack of playing surfaces and dedicated training centers, Onguene started playing with her male counterparts at an early age. She would meet up with the boys from the hood every evening for a kickabout.

With time, her father and brothers were quick to understand her passion for football and encouraged her to work harder; but for her mother, it was a titanic task trying to convince her about her desire to pursue football as a career.

It is in these streets that she was spotted by Gondicam, a Douala club where her career took off, spending six months there.

Her talent not in question, Onguene was spotted in an annual tournament bringing together the best clubs from across all the 10 regions of the Central African country. Canon Sportif Filles de Yaounde were attracted to her talent and recruited her.

The move to Canon proved to be a masterstroke as it is with this club that doors for the national team started opening up.

The budding striker showed her prowess with her career taking off. She helped Cameroon to the 2011 African Games gold medal in Mozambique and a year later, scored the only goal for Cameroon at the London Olympic Games.

At the 2012 Africa Women’s Cup of Nations in Equatorial Guinea, she continued to shine and played an integral role as the Les Lionnes clinched bronze. Two years later in Namibia, she was still part of the squad as the Cameroonians improved from third to second, and to qualify for the FIFA Women's World Cup the first time.

Onguene then made another move in her career after spending five seasons at Canon, moving to domestic giants Louves Minproff where she continued to scale the heights and improve tremendously.

She played an integral role scoring two goals as the Cameroonians reached the round of 16 of the FIFA Women's World Cup in Canada 2015.

Having shone in Canada, it was only inevitable that Onguene would scale up in her career and she made her first ever move abroad when she signed for Russian side WFC Rossiyanka.

“It wasn’t hard to adapt into the new team because it was a club which was very open to foreigners. My compatriots Ajara Nchout and Ejangue Siliki were there as well as other Nigerian players,” recalls Onguene.

Her star continued to shine as she managed to play the UEFA Women’s Champions League with her Russian club, but the adventure ended in the round of 16.

“It was of course a memorable achievement though I just played the first leg match against Bayern Munich in Germany which we lost 4-0. After that I had to travel back to Cameroon to play at the 2016 Women's AFCON which was hosted at home,” she explains.

All this while, her mother hadn't quite grasped the idea of her daughter playing football.

“The first time my mother saw me play and found out what I do was at the 2016 Women's Africa Cup of Nations in Cameroon. My brothers told me that she watched about 20 minutes of the FIFA Women's World Cup in 2015 on TV against Japan,” she recounts with a massive smile.

And she ensured that her mother was not disappointed at the first time she saw her daughter play football. She finished as the tournament's Most Valuable Player, though they could not battle for the title after falling to eternal rivals Nigeria in the final.

After a short stint with Rossiyanka, she landed another opportunity with a top Russian club, signing up with CSKA Moscow. Onguene proved a worthy buy for CSKA as she played a massive role to help them qualify for the UEFA Women's Champions League.

She now hopes to continue with her form and help the team perform better in the 2020/2021 season.

With her club career looking all set, Onguene also has her eyes cast on national team duties with the immediate target being qualification to next year’s Olympic Games in Tokyo.

The Cameroonians are buoyed by their performances in big competitions over the past two years, clinching bronze at the 2018 Women's AFCON in Ghana and reaching the round of 16 at the FIFA Women’s World Cup in France last year.

Their dream of a direct ticket to Tokyo was quashed by Zambia, but Les Lionnes will have a second jab at qualification when they take on Chile in the intercontinental play-off in February 2021.

“We want to participate in the Olympics for a second time and I believe that my teammates and I still have this desire,” the captain affirms.

Onguene knows only too well the pressure that comes with draping the Cameroonian national team jersey with the fans one of the most demanding in the continent. But for the 31-year old, she looks at this as a pleasing fact and not pressure.

“When the fans are in the stadium, we are energized and we want to make them happy. When we have important matches, they are always there for us. It's heart-warming to know that people leave their busy lives to come to the stadium to support us,” she said.

With her career now heading to the sunset days, Onguene is optimistic that the future of Cameroonian football is in safe hands, citing the talents of Alexandra Takounda, Charlene Meyong, Mireille Tchiengang and Colette Ndzana as those who will carry on with the mantle when the experienced lot is gone.