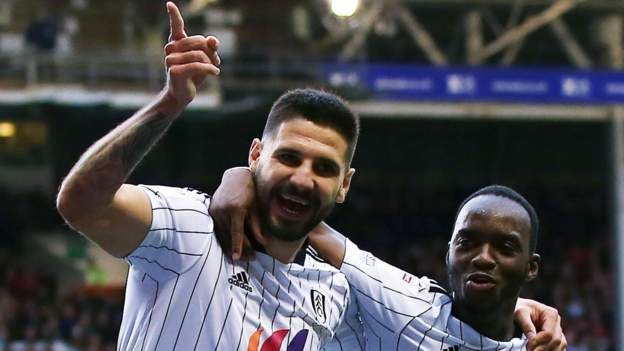 Nottingham Forest suffered their first setback since Steve Cooper became manager as Fulham reclaimed second place in the Championship with a decisive victory at the City Ground.

An own goal by Djed Spence gave the Londoners a half-time lead, with neither side at their best going forward.

Lewis Grabban wasted a chance to equalise after the break and Fulham ran away with the game by scoring three more in nine minutes.

Aleksandar Mitrovic grabbed his 14th and 15th league goals of the season, the second from the penalty spot after a foul on Denis Odoi, either side of a strike by Neeskens Kebano.

The win lifted Fulham above West Bromwich Albion, who beat Bristol City on Saturday, but the Cottagers are still five points behind leaders Bournemouth, with Forest down in 15th.

After managing only one point from the first seven games of the season under Chris Hughton, Forest had made big strides with four wins and a draw since former Swansea boss Cooper was appointed as his successor.

But they were unlucky early on when Mitrovic flicked on Jean-Michael Seri's corner and on-loan Middlesbrough wing-back Spence stabbed it into the net as he tried to clear.

Brennan Johnson flashed a shot wide in reply, but Forest's best opportunity fell to Grabban, who swept the ball high over the bar from Philip Zinckernagel's cross.

A defensive mix-up left Mitrovic with a chance he could not miss to double the lead and Kebano beat Forest keeper Brice Samba at the near post from Harry Wilson's well-weighted pass.

The Forest keeper guessed correctly but could not quite manage to keep out Mitrovic's spot-kick after Odoi was fouled by Ryan Yates and the closest the home side came to a consolation was Joe Lolley's low free-kick, which Marek Rodak just managed to claw away.

Forest are next in action away to QPR on Friday, with Fulham - who have now won on three successive league visits to the City Ground for the first time since the 1950s - at home to promotion rivals West Brom the following day.

"I'm really disappointed with the referee on the first goal, we warned him about the blocks at Fulham's set plays.

"Credit to them, they do it really well, but it's a clear foul by Odoi and he was looking right at it. He wasn't supposed to referee the game and he didn't look ready for it, so we were annoyed by that.

"I'm not saying we deserved to win, but it was never a four-nil game, so we're not going to let this derail us, we've worked too hard over the last couple of weeks.

"If you create, he's (Mitrovic) a very dangerous player, it's up to us to create the conditions for him to score.

"I don't always like to talk about one or two players but he has already scored 15 goals so he is clearly an important player. For him to be in the right spots, everyone is working really hard for him.

"Our aim was to finish the week with nine points and that's what we did.

"It was a tough game like we expected, even if you score early in the game like we did, we came here to play against a team in a great moment the last six games."

Brennan Johnson (Nottingham Forest) wins a free kick in the attacking half.

Joe Worrall (Nottingham Forest) wins a free kick in the defensive half.

Harry Wilson (Fulham) wins a free kick in the attacking half.

Attempt missed. Josh Onomah (Fulham) right footed shot from the right side of the box misses to the left. Assisted by Bobby De Cordova-Reid following a fast break.

Joe Lolley (Nottingham Forest) wins a free kick in the attacking half.

Harry Wilson (Fulham) has gone down, but the referee deems it simulation.