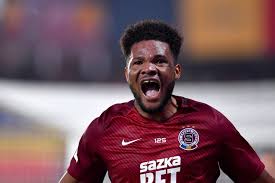 Turkish giants Galatasaray are in search of a new striker and believes Ghanaian striker Benjamin Tetteh as a perfect addition, footballghana.com can exclusively report.

Footballghana.com understands that Galatasaray head coach Faith Terim has been a huge admirer of the player and made attempts to sign him in the past without success. He has however not given up on the prospect of bringing the 22 year old from the Czech Republican side.

Their plan is to bring some competition to Columbian striker Radamel Falcao and take his place when the 34 year old eventually leaves the club. They are willing to pay an amount of 7.5 million euros for the player who they have made their number one offensive priority this summer.

The Ghanaian has scored seven goals and assisted four for the Czech Republic first tier side in 25 appearances this season in all competitions. His current value stands at 1.2 million euros according to transfermarkt.