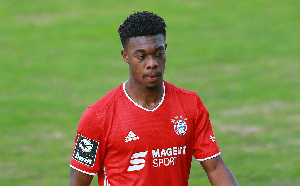 The 19-year-old who is scout of contract this month is said to be interested in a move away from Bayern Munich.

Footballghana.com understands the Bavarian giants would love to extend Scott’s contract for another year but the player wants to leave.

Talks are ongoing between the player Dusseldorf over a possible move ahead of next season.

The former Bayer Leverkusen player featured for Bayern Munich youth side last season in the Regionalliga league where he scored 7 goals and provided 6 assists in 24 games.

Scottish giants Celtic are also monitoring the Ghanaian midfielder situation at the club.

The 19-year-old has featured for Germany at all youth levels but is still eligible to play for Ghana.