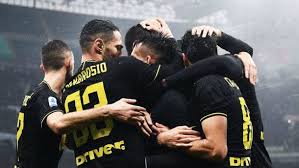 Ghanaian midfielder Kwadwo Asamoah has thanked Inter Milan fans following their 2-1 win over SPAL as they leapfrogged Juventus to go top of Serie A table.

Asamoah, who had been sidelined for the past three weeks made a return on Sunday as he named on the substitute bench at the San Siro.

Argentina forward Lautaro Martinez bagged a brace as the Nerazurri's picked up all three points at home.

Martinez opened the scoring in the 16th minute from the edge of the area before doubling the hosts' lead in the 41st minute of the game.

Mattia Valoti scored a consolation goal for SPAL after the break, while goalkeeper Etrit Berisha denied Martinez his hat-trick.

Inter are one point above defending champions Juventus as they head into match week 15.

After the game, the 30-year-old took to twitter to post," Thank you for the amazing support! Important win."

The Ghanaian is likely to make a return to the starting line up when Inter host AS Roma on Friday.