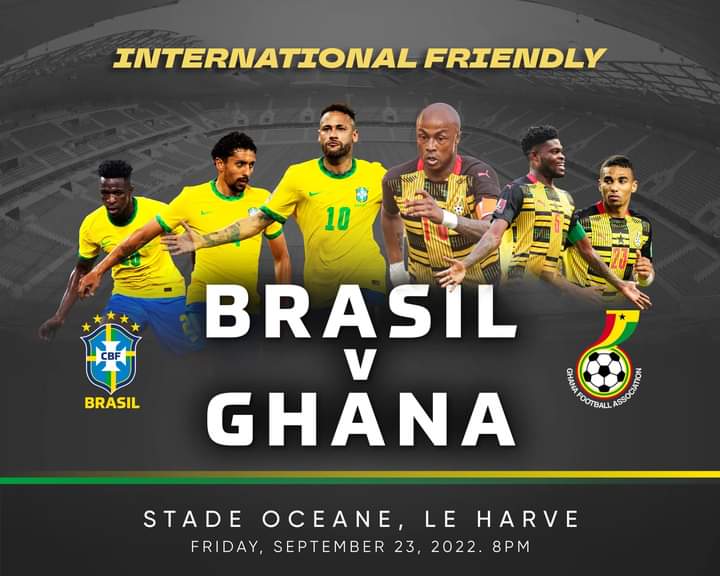 Catch the international friendly between Ghana and Brazil live on SuperSport on Friday, September 23. Kick-off is at 20:30 CAT

Could easily be the line-up in their World Cup opener against Serbia, couldn’t it? When the line-up reached Ghanaian fans, the social media reaction could best be described as panicky. The apprehension is justified. Not only are the Seleção favourites to win a sixth world title in Qatar, but also their record against the Black Stars at this level is almost impeccable. (In fact, Ghana’s own captain, André Ayew, told local media in March that his standout pick to win the tournament are the South Americans).

The last time Brazil played Ghana at senior level, in 2011, the social media age had not exploded as it has presently. But it was vibrant enough that the pre-match hype was considerable, as it is on the streets of Ghana today.

South Africa had hosted the world’s best a year prior, in what has become known as The First Twitter World Cup (as if it were some war) and the microblogging site had solidified its reputation as a crucible of quality football banter.

And that 2011 matchup at Craven Cottage – home of Fulham – was significant for several reasons.

“Facebook was big then, the place where people discussed [issues], but I remember for this game in particular, people were buzzing on Twitter for Ghana,” recalls Oluwashina Okeleji, an African football specialist for the BBC. “Even Nigerians, who would usually ridicule Ghanaians on a good day or wish for them to lose, were rooting for Ghana because of their 2010 World Cup outing. Back then, there was this camaraderie among the African teams on social media.”

11 years on, things are not the same, with the Black Stars facing Brazil at a time when the West Africans are in search of an identity once more. Things were quite the opposite at the time.

“There was this energy that Ghana football had at the time,” reflects Ghanaian journalist Michael Oti Adjei, a former BBC Sport correspondent for more than a decade.

“This was a game played in September 2011, and not long after the high of 2010. Remember Asamoah Gyan had moved to the Premier League and was doing well, as were big name players like Michael Essien and the rest.”

The Black Stars had played a very good game against England a few months before, drawing 1-1 at Wembley. Oti Adjei recalls: “There was a sense that Ghana was on a high. A bit like now [when there is a chance to see many new players], there was a new team being built by [then coach] Goran Stefanovic that people were really excited about – a first opportunity to see Adam Kwarasey, [Jordan Ayew] and the like. There was a really feel-good factor about Ghana football.”

And, of course, the profile of the other regulars: Sulley Muntari. Kevin-Prince Boateng. Kwadwo Asamoah. John Paintsil. Plus, it was Brazil, who did not need any hype. But the team was in a bit of disarray at the time, as Okeleji points out.

“Brazil were struggling, after an embarrassing exit from the Copa America – and they were under pressure. Ronaldinho had been out of the team [for nine months], and he had to be recalled by the manager Mano Menezes.”

Indeed, the five-time World champions were vulnerable, looking to reboot after defeats to France, Argentina and Germany. They needed to beat Ghana to start a slow, painful rebuild in time for the 2014 World Cup, which home fans expected them to win.

“If there was any African team to beat Brazil at the time,” Okeleji notes, “it had to be Ghana, who have always been known as the Brazil of Africa.”

It is unclear who gave Ghana that nickname, but there are a few theories. Between 1949 and 1956, there were three tours by African national teams to Britain. The first was by the Nigerian national team in September 1949. That was followed, in 1951, by a Gold Coast XI (the name changed to Ghana six years later following independence) who toured England and Ireland, and then a Ugandan XI in 1956.

Football historians say it was Ghana’s flair and style that led to the likening to Brazil. For a few decades after that UK tour, the Black Stars justified the hype, sambaing their way to three Africa Cup of Nations trophies, and other minor ones, within 32 years.

But since 1982, the Brazil of Africa have won nothing – major or minor – at senior level, while the real Brazil have won 12 major titles – World Cup (twice), Copa América (six times), and Confederations Cup (four).

Clearly, the two teams do not belong in the same WhatsApp group anymore.

Neymar, a ridiculously talented 19-year-old in that 2011 game against Ghana in London (now aged 30 and still ridiculously talented), will start when the two nations face-off again on Friday. Thiago Silva, then 27, now 38, played the full game, as did Neymar. Danilo, then a promising U-20 national team player understudying Dani Alves at right back, had been invited, but did not play. He now owns the role.

For Ghana, then 20-year-old Jordan Ayew (and now 31) is the only surviving member of the team that lost to the Seleção. His elder brother, André, would have definitely played, too, but for injury. Now 32, he’ll captain a new-look Black Stars hoping to forge a cohesive unit ahead of the World Cup.

“We are assembling different generations and different cultures into one unit, and making sure they bond quickly during this international break is priority,” assistant coach George Boateng admits, knowing that a good performance in Qatar will depend heavily on how the quartet of players who have just switched nationalities will gel: Inaki Williams (forward from Spain), Tariq Lamptey (defender/winger from England), and Ransford-Yeboah Königsdörffer (forward from Germany).

Derek Boateng, a member of the last three meetings between the two sides (’06, ’07, ’11), swats the notion that the Black Stars showed their more illustrious counterparts too much respect. “If anything, we took the games too personally. Maybe we went in too aggressively,” he tells SuperSport.

He urges Otto Addo to “try and psychologically calm the boys down before the game because they will definitely be super hyper by now.”

Brazil don’t joke, yes, but they’ll be sure to have fun at Le Havre on Friday. Will it be at the Black Stars’ expense?