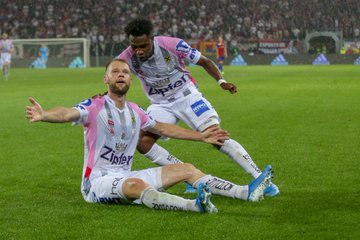 Ghanaian international, Samuel Tetteh has shared his delight following LASK Linz impressive away victory over Swiss giants FC Basel in the first leg of the third round qualifying round in the UEFA Champions League.

He contributed immensely and ended providing the assist for the second goal for LASK Linz to hand them the win in the first leg.

Following an edgy first half encounter that ended in a goalless draw, both teams resumed the second half with more purpose in hopes of seeing off the other to pick up what will be an important victory.

LASK Linz stunned the home side just five minutes into the second half after defender Gernot Trauner turned in a Peter Michorl assist.

Late into the match, Samuel Tetteh assisted Jaoa Klauss De Mello to score the second goal for the Austria-based club to put them in a comfortable lead.

With just five minutes to end proceedings, the home side pulled one back five through a good goal from Luca Zuffi.

Samuel Tetteh took to his official Twitter handle after the match to express his delight. He is targeting another good display from his side next week when they host FC Basel at the Linzer Stadion.

“Amazing Win Away from Home. We go again next week”, Samuel Tetteh said.