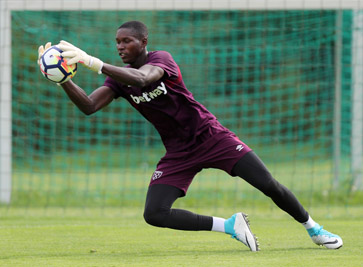 Joseph Anang of West Ham during a training session in Hartberg, Austria. (Photo by West Ham)

Ghanaian goalkeeper Joseph Anang want to be a regular starter for West Ham United first team after clinching a professional contract with the club.

The promising 18-year-old stopper signed his first professional contract with the English Premier League side over the weekend.

He put pen to paper on a three-year deal after spending one year with the youth side of the Hammers.

The deal sees Anang commit his future to the Hammers until 2021.

This represents a major breakthrough for Ghana as he becomes the first goalkeeper since Richard Kingson to sign for a club in the big leagues of Europe.

The teenager was naturally delighted to sign his first pro terms and looked ahead to grabbing a first team place in east London.

“Next year, my aims are to be playing for the club’s U23s but there are great goalkeepers already at this Club, so it depends on how hard I work and that I can show people I’ll continue to improve as a goalkeeper," Anang said.

“In the future, of course, the long-term ambition is to become a first team player here but I have to start from where I am now, keep working hard every day and hopefully those aims will one day be achieved.”

Having joined the Club as a Scholar in July 2017, Anang had to wait patiently for his debut whilst international clearance was obtained.