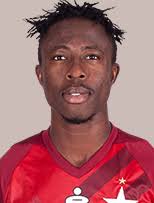 Wisla Krakow midfielder Emmanuel Kumah recounted his early adjustment struggles after securing a move to the Polish side.

He made the move in the 2020 winter transfer window and has now adjusted to the club.

But, in the beginning, he struggled, especially with the language.

"[I struggled] certainly with the tongue. From the beginning of my stay in Wisła, I was learning Polish, but I had difficulties with absorbing the next words. Fortunately, I already know a lot more, so I don't have communication problems in my team," he told FutbolNews.pl.

"At first I was scared, until I was afraid to approach anyone (laughs). However, it quickly turned out that the Wisła players are helpful. I think that during this time, Kuba Bartosz helped me the most, on whose support I could count on from the beginning."

Kumah featured for Ghana's U-20 team earlier in his career.