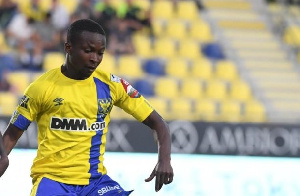 Ghanaian trio were in action in a Belgian Jupiler Pro league fixture between Sin Truiden and Cercle Brugge.

Cercle Brugge defeated Sin Truiden 2-1 to seal all three points in their match day 14 game of the on-going season.

Sint Truiden’s Asamoah lasted the entire duration of the game with scintillating display as despite ending up the losing side.

His compatriot Elton Acolatse played 25 minutes as he come on to replace Sousa for Sint Truiden.

Godfred Donsah, who played for 70 minutes before being substituted Kouame started for Cercle Brugge.

Goals from Hoggas and Saadi gave the home side the victory with Boli scoring a consolation goal.

Donsah has made nine appearances for his side so far this season, however he is yet to score or assist while Asamoah has played in 13 games and he is also yet find the back of the net.