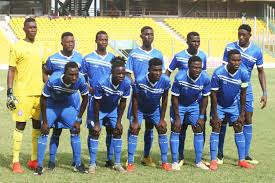 Great Olympics' return to the Ghana Premier League has been nothing to write home about after losing back-to-back games in their opening two games of the 2019/20 season.

The Oly Dade lads will be making a long trip to Bechem to face Bechem United on Sunday who have had a topsy-turvy start to the season with a win and a loss from their first two games.

On paper, both teams possess the same qualities despite Olympics losing their opening two games and will serve fans with good football on the field of play.

Gladson Awako and Emmanuel Clottey have been below par since the league began, however they will have to come to the party to help revive their league campaign.

Playing at the Nana Fosu Gyeabour Park, Bechem United are considered as favourites as the Accra-based side has lost all their two visits to the venue. They suffered a 2-0 and 1-0 defeats respectively during the 2015 and 2017 seasons.

Great Olympics are currently in the relegation zone and a win against Bechem United could spark their season.